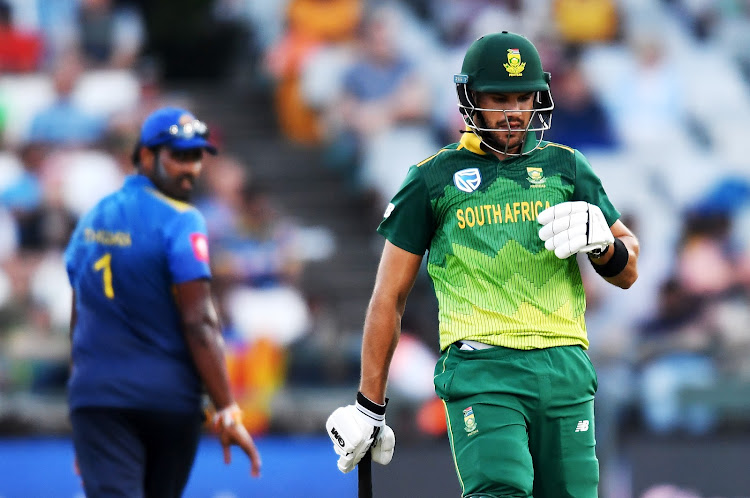 Who must do what to whom for South Africa to stay in the running for a place in the World Cup semi-finals isn’t Aiden Markram’s problem.

Winning is‚ and that means Proteas beating Pakistan at Lord’s on Sunday.

“We definitely never feel down and out‚” Markram said on Saturday.

“We’ve tried to put a lot of focus completely on us going forward. It’s obviously really important that we win the remaining three of our games‚ and if there’s outside chance of qualifying that would be incredible. But the only way we’re going to do that is by winning the next three games.”

It’s a tangle of ifs and buts‚ but for South Africa to stay alive in the tournament they must win on Sunday as well as against Sri Lanka on Friday and against Australia on July 6.

That will mean better batting by a team who have reached 250 just once in five completed innings‚ one of which was a chase of only 127.

There have been six South Africa half-centuries and no hundreds‚ which pales with the output of‚ for instance‚ Australia — whose batters have scored three centuries and 11 50s.

David Warner owns the biggest innings of the tournament so far‚ 166 against Bangladesh‚ and Jason Roy and Aaron Finch have both made 153.

South Africa’s highest score is the 68 Quinton de Kock made against Afghanistan.

“It's really important to get yourself in‚ because we’ve seen the knocks and the magnitude of knocks that some of the top players in the world are delivering at the World Cup‚” Markram said.

“For us as a batting unit‚ we are pretty much doing the hard work up front. We are getting in and we are not kicking on. It does definitely set you back. Every time you lose a wicket‚ naturally the runrate will drop and the new batter needs to get himself in and it takes a bit of time.”

“It’s definitely something we are looking to rectify. We pride ourselves on getting big hundreds as individuals because that sets up the team and puts us in a good position.

“The positive is that we have been getting in‚ so we are doing the tough part fairly well up front. Now it’s about converting into really big scores.”

To do so on Sunday‚ South Africa will have to subdue Pakistan’s quality pace attack. Going into Saturday’s games‚ only Jofra Archer and Mitchell Starc had taken more wickets than Mohammad Amir’s 13 — which includes his 5/30 against Australia‚ the best performance of the tournament and one of only three five-wicket hauls.

Pakistan’s batters aren’t quite in the same league‚ with only five half-centuries banked so far.

But Babar Azam‚ Pakistan’s highest ranked player at No. 8‚ is a threat to all who face him.

Happily‚ for South Africa‚ they will be able to take on that challenge without injury concerns.

What with conditions at the former home of cricket — which now lives in Dubai — for the tournament not yet known because Sunday’s game is the first match here‚ that’s an important factor.