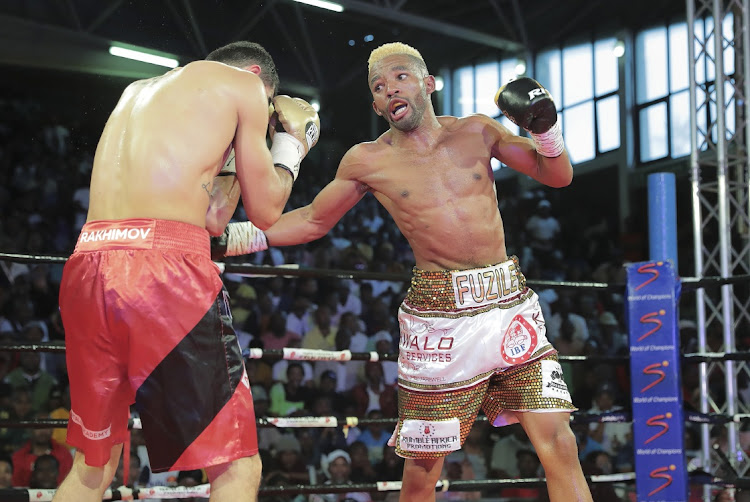 Azinga "Golden Boy" Fuzile and Shavkhatdzhon Rakhimov exchange leather in their IBF junior lightweight elimination fight which Rakhimov won by a TKO in the eighth round.
Image: Nick Lourens

It is only a week before Azinga “Golden Boy” Fuzile gets involved in the fight of his life at the Hulu Theatre inside Madison Square Garden in New York where the pride of Duncan Village opposes Japanese fighter Kenichi Ogawa for the vacant IBF junior-lightweight belt on November 27.

But there is a deafening silence from his handlers – trainer Mzamo Njekanye, manager Colin Nathan and Rumble Africa Promotion (RAP) owner Thembalethu Ntuthu. Under normal circumstances RAP’s CEO Nomfesane Nyatela would be wrapping up everything in terms of publicity this week.

It is thought differences between Njekanye, Nathan and Ntuthu may be behind the silence on the fight, which is the biggest involving a South African since Moruti Mthalane lost the same organisation’s flyweight title on April 30 to Paul Edwards in the UK.

Fuzile’s fight for the IBF belt, which has previously been held by Brian Mitchell, Cassius Baloyi, Mzonke Fana and Malcolm Klassen will be staged by Matchroom Sport of promoter Eddie Hearn.

The fight will deputise for the WBA Super, IBF and WBO lightweight championship between holder Teofimo Lopez and Australian George Kambosos. Fuzile earned the right to challenge for the title by winning the elimination fight against Marti Ward on May 29.

Nomfesane refused to be drawn into discussing their quietness on the upcoming fight. She would only announce that RAP will be represented in New York by Nathan who serves as their international advisor. That was because Nyatela and Ntuthu, who are serving the ANC in the Amathole municipality, must be in the country for the swearing in of new councillors next week.

Fuzile must be in New York on Monday, which is five days before the fight, as per the fight contract.

Ntuthu said: “I am pushing that they leave this weekend. We are not quiet but we were dealing with some other issues. All of a sudden there are many advisors and sponsors with different interests. We endured such a confusing situation and we needed to deal with it in our small corner. We had to be patient. We are not deploying Colin to be with Azinga, he is going there on his own.”

Attempts to get comment from Njekanye were unsuccessful. His phone was off.

Fuzile goes into the fight carrying the hopes of South Africans, especially those of his homies in Duncan Village, a shanty township near East London that has produced some big-name boxers. One such fighter is Mbulelo “The Slayer” Botle – the hard-hitting former SA bantamweight champion who went on to win two IBF belts in two weight divisions.

Botile won his bantamweight belt in 1995 and the featherweight strap in 2000.

Gideon Buthelezi must reciprocate with nothing but victory when he defends his IBO junior bantamweight boxing belt at the International Convention ...
Sport
2 weeks ago

The fight on Friday night in Sweden for Rita Mrwebi, the 34-year-old homeless mother of a 14-year-old, is about survival. She says she was kicked out ...
Sport
2 weeks ago

Getting beaten badly the first time he wore boxing gloves during a sparring session made Rick Rex hate the sport.
Sport
2 weeks ago

Tomorrow marks 41 years since Peter “Terror” Mathebula made history when the pocket-sized former SA flyweight champion from the dusty streets of ...
Sport
3 weeks ago
Next Article