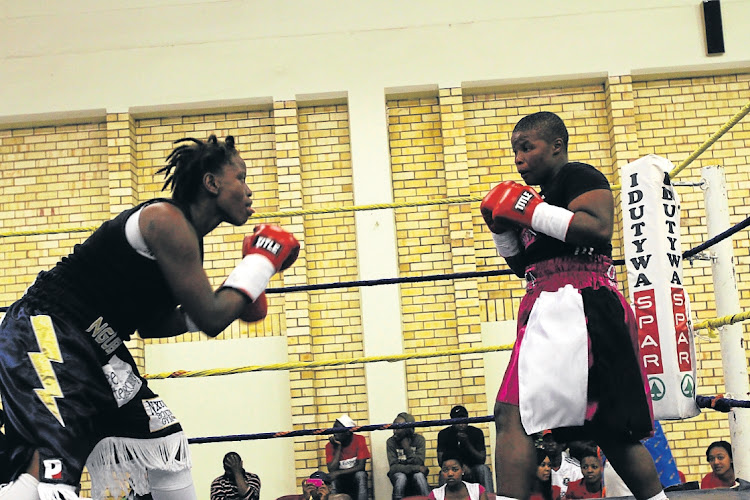 The fight on Friday night in Sweden for Rita Mrwebi, the 34-year-old homeless mother of a 14-year-old, is about survival. She says she was kicked out of a flat in Hillbrow due to her inability to pay rent.

That was because the former SA welterweight champion was on a three-year sabbatical. Boxing is her only source of income.

The Mthatha-born, Eastern Cape, fighter jets out tonight to Sweden where she will earn around R40,000 in a non-title bout. Mrwebi, who made a comeback on September 24 with a draw over six rounds with Rushda Mallick at Meropa Casino in Limpopo, will be accompanied by trainer Sinalo Nokhele.

Mrwebi’s original trainers George Khosi and Xolani Moyo could not get their visas on time; that's how Nokhele stepped in.

Mrwebi says life has been very difficult but she did not lose hope that the stars will shine on her one day.

“I was kicked out of the flat and thrown in the streets with my son,” she said. Fortunately, she got an offer to face Mallick to earn some money in September. Now she has been offered even something bigger and better against Marianne Ahlborg. It will be Mrwebi’s first fight outside SA since turning professional in 2008.

Mrwebi is a capable boxer and entertainer with a bubbly personality. She owns the BSA championship belt after defending successfully three times, which is the required number of defences for any female champion to claim the ownership of the belt. She is yet to receive her belt. She says the purse money she will earn against the inexperienced 30-year-old Swedish who is undefeated in four fights is “better”.

“This is the fight for survival – get a place to stay and also to earn some money for my son,” she said.

“I am excited. It comes at the right time when I just made a comeback. Boxing is a God-given talent to me. I looked at the number of rounds that we will be fighting –  it’s six rounds and not 10 rounds so I accepted it. I saw that this person [Ahlborg] in her recorded fights that she is nothing special.”

Getting beaten badly the first time he wore boxing gloves during a sparring session made Rick Rex hate the sport.
Sport
2 weeks ago

Tomorrow marks 41 years since Peter “Terror” Mathebula made history when the pocket-sized former SA flyweight champion from the dusty streets of ...
Sport
3 weeks ago

Xolisani “Nomeva” Ndongeni is still bleeding from the wound inflicted on him in the defeat by unfancied Sibusiso “Prince” Dlomo, who knocked him out ...
Sport
3 weeks ago

It is factually incorrect for boxing people to distort the truth and instead misinform the fight fraternity with lies that end up hurting both the ...
Sport
3 weeks ago
Next Article