Late veteran referee moved around ring like a ballerina 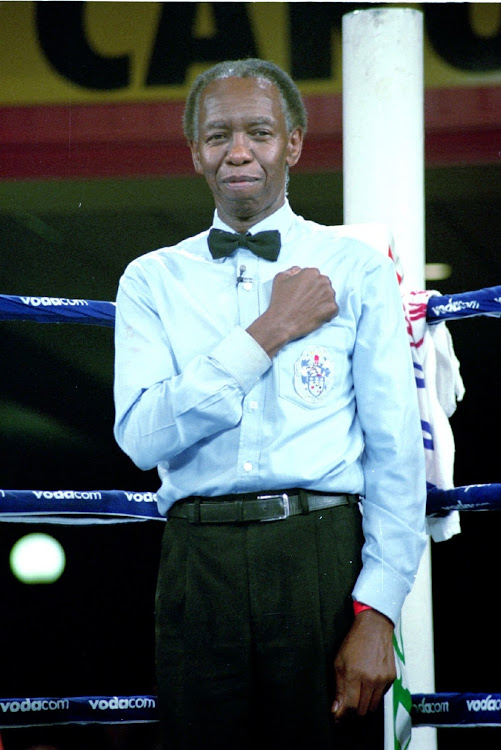 He said the late boxing icon – who remained humble despite his humungous  achievements as a fighter, referee and judge – passed away on Tuesday morning. Buqwana, 81, had Alzheimer's. His poor health forced him out of the game.

He was also known for moving around a boxing ring like a ballerina. "He was motivational in being a sportsperson and he moulded many young people to become big sport personalities. Myself and Malefetsane Ngatane grew up under him," said Sithole.

"Malefetsane ended up being an amateur boxer at the same Dube Boyz Club where Bra Alf trained."

Ngatane later became a top boxing administrator and was more than once chairperson of Boxing SA.

“Bra Alf and Bra Steve Maseke are the ones who invited Theo Mthembu from Alexandra township to come and train them in Dube," said Sithole. “Long after leaving boxing, he used to do road works, but now he was just taking long walks.”

Buqwana officiated in the “Bite Fight” between Mike Tyson and Evander Holyfield in Las Vegas in 1997. Tyson bit off part of Holyfield’s ear and was disqualified from the fight and also lost his boxing licence which was later reinstated.

Buqwana’s cardinal sin was to call a technical draw. The boxers clashed heads accidentally in the fourth round of their fight at Sun City on June 14 1986.

Doctor Joe Jivhuho inspected the wound and advised that the fight be stopped in round five because blood blocked Volbrecht's view and Buqwana – as the role arbitor – declared it a technical draw.

A technical decision could be taken only after half the number of scheduled rounds had been fought. In that case the fight had not reached the halfway mark. It was the first time that such a decision was implemented in SA and that made Buqwana famous but also unpopular.  Mayisela, their favourite fighter, lost out on the title and black people bayed for Buqwana's blood.

All world bodies then amended their constitutions to restrict the rule to four rounds – not half the scheduled rounds – in order to give leeway to six-, eight- and 10-rounders.

Buqwana was later appointed as the first black SA referee to officiate in a major world title fight between then defending WBA junior lightweight champion Alfredo Layne against Brian Mitchell at Sun City on September 27 1986.

His appointment resulted in him receiving former president Thabo Mbeki's Lifetime Achievement Award in 1993. The well-travelled veteran from Orlando West in Soweto  officiated in more than 30 world title fights around the world.

The former Transvaal featherweight champion retired in 1975 after winning 55 of his 60 fights. Buqwana began officiating in 1976.

Grading is a good place to start
Sport
1 year ago

Innocent “Tycoon” Mantengu – a Shembe member from Mtubatuba in KwaZulu-Natal  – says prayer heals all wounds. The former SA boxing champion who is ...
Sport
5 months ago

Rising boxing administrater Lehlohonolo Ramagole – a former professional boxer from Soweto – says he is delighted to have been appointed permanently ...
Sport
5 months ago

Bungu, trained by iconic Mzimasi Mnguni in Mdantsane – dethroned revered American Kennedy McKinney in front of 5,000 exhilarated fans inside a ...
Sport
5 months ago
Next Article