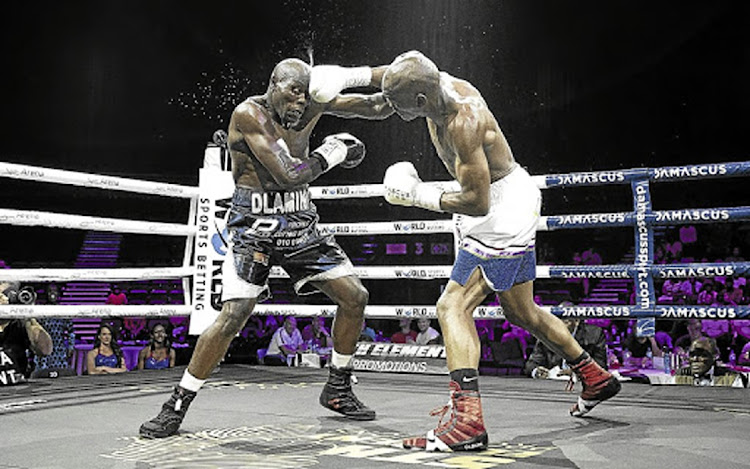 Nkululeko Mhlongo jolts the head of Walter Dlamini en route to a fourth-round stoppage in their previous fight in the Sun Arena in Pretoria.
Image: Nick Lourens

The black mamba is naturally a highly venomous snake that is widely considered to be the deadliest. It is even worse when it is wounded.

This paints a picture of what could happen when dethroned WBA Pan African middleweight champion Walter “Black Mamba” Dlamini confronts Nkululeko “Bull Dog” Mhlongo – the man who ended his reign when they met in Pretoria last year.

Mhlongo seized that title with the SA belt through four ferocious rounds.

Dlamini has been afforded the opportunity to regain the WBA Pan African belt and he will challenge Mhlongo in Durban on December 20. Their grudge fight will deputise for the IBF flyweight bout between reigning king Moruti “Baby Face” Mthalane and Jayson “Smasher” Mama from the Philippines.

Dlamini, from Limpopo, goes into the fight wounded after losing his trainer Lionel Hunter, who died last month. He helped Dlamini win the SA title that had evaded him twice before under other trainers. Dlamini registered the shortest title fight in the history of local boxing in stopping defending champion Wade Groth in 42 seconds in 2018.

Dlamini said his long-time amateur trainer Nicky Ness is helping him to prepare for the fight that will be staged by Nokwanda Mbatha’s Tono Promotion. Ness is being assisted by Tamrin Raynor, the 22-year-old woman who was Hunter’s assistant.

While Boxing SA has issued a statement assuring licensees that it is undertaking an exercise to establish the number of South African championship ...
Sport
11 months ago

Dlamini believes he could have won the last fight against Mhlongo, had the referee not intervened  too early.

“Mhlongo did not drop me. He caught me with some good shots and I was on my feet but the referee just jumped in between us and stopped the fight. I was very angry,” said Dlamini yesterday.

It explains why he warned stylish Mhlongo to “surrender to Caesar the things that are Caesar’s” and added that he was coming hard for him. “I am wounded spiritually; the mamba in me is wounded,” he said. “I am gonna show Mhlongo something he has not seen before.”

But Dlamini has not fought since losing his belts to Mhlongo. Fortunately, he and Ness have a history, otherwise the time they have together would not be sufficient to build an understanding with each other.

Mhlongo is trained by Vusi Mtolo.

The pain of seeing SAs accomplished boxer Vuyani “The Beast” Bungu being ignored for the induction to the International Boxing Hall of Fame in New ...
Sport
11 months ago
Next Article