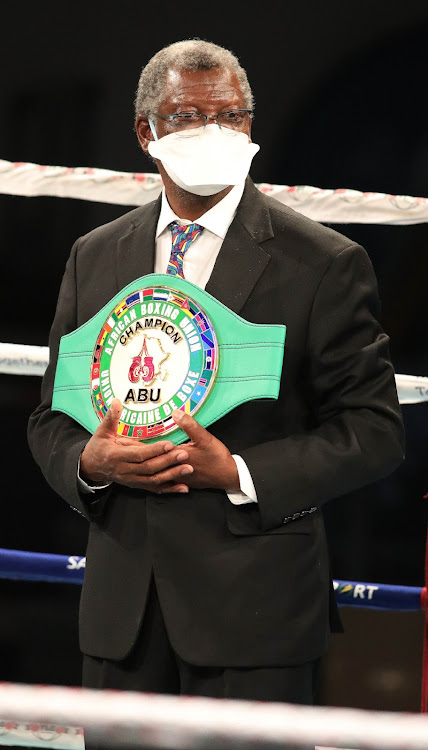 Boxing South Africa (BSA) chairman Peter Ngatane has distanced himself from the claim that the bio-bubble no longer applies to boxing.
Image: Veli Nhlapo

The costly bio-bubble –  the environment sealed off from the outside world and accessed by a limited number of people only which is used to allow events such as sports matches to take place during the coronavirus – is no longer applicable in boxing and this was confirmed by a well-placed administrator within the sports ministry.

Boxers, trainers, managers and the administrators who were to be involved in a tournament were entered into the bubble a week prior to action. They all had to be tested for Covid-19 before entering the bubble, where promoters who organise matches had to be accommodated in separate rooms and feed all of those people. The promoter also made sure there is space for boxers to train while is isolation. Their temperatures were always monitored.

“It was never government policy to start with,” said the admnistrator who asked to remain anonymous.

“It was suggested by the Premier Soccer League because they wanted clubs to finish the 2019-2020 season. They finished that season and have started the new one. Is the bubble still applicable? The answer to that is no.

“The bio-bubble was not even intended to be a blanket operation. Football and netball made presentations to the ministry with guarantees that they would make sure that all Covid-19 health protocols were followed.”

Following what BSA said was an elaborate and rigorous process by the sports department on July 9, BSA received approval from minister of sports Nathi Mthethwa for the resumption of non-contact training as per the operational plan submitted by BSA. That plan was titled “Risk-adjusted plan for safe return to the ring”.

Will Prince ascend throne or Tiger continue reign of terror?

The fight fraternity in Gauteng must brace itself for an artistic boxing bout between talented boxers Xolani “Tiger” Mcotheli and Sibusiso “Prince” ...
Sport
1 year ago

“If a promoter applies for a fight date and says he or she will enter boxers and trainers into a bio-bubble, then it will entirely be up to that promoter,” said the administrator.  “ All other measures like testing, monitoring temperatures, wearing masks and fighting behind closed doors still remain a must.”

“I heard that someone from the ministry is telling people that the bio-bubble is no longer applicable. Well, we will wait until the minister writes to us and informs us. It is mischievous of people to talk loosely just like that,” Ngatane said.

He said BSA was answerable to parliament and not to individuals.

“In our meeting with the ministry just last week we were asked if we are still practising safety health measures. If someone from the department makes an utterance that the bio-bubble is no longer applicable, he or she must communicate with BSA in writing,” said Ngatane in his parting shot.