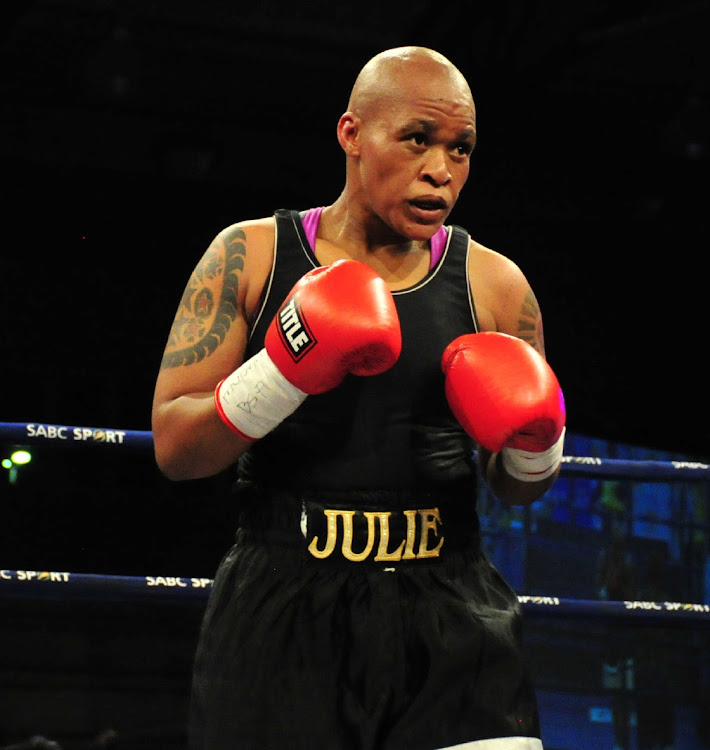 Julie Tshabalala last defended her welterweight title in 2014. There is no-one to defend against.
Image: Philip Maeta/Gallo Images

While Boxing SA has issued a statement assuring licensees that it is undertaking an exercise to establish the number of South African championship belts owed to former and current national champions, the regulatory body came under fire from retired former IBF junior-welterweight and IBO welterweight champion Lovemore “Black Panther” Ndou for owing champions their belts.

Ndou, who has raised his hand to assist in getting local boxing out of the quagmire, said the issue of SA boxing champions having to defend their belts five times to eventually claim ownership of the SA Championship belt is ridiculous. Female titlists are required to defend three times before they own the belt.

The requirement worked magic for male champions in the 1980s because each of the 17 weight divisions had more than enough contenders for the national belt. That has changed over the years with the sport gradually losing its appeal to the younger generation who would rather join cage fighting than be boxers because of professionalism, recognition, appreciation and financial remuneration.

There are weight classes in SA such as the light-heavyweight division where there is a champion (Nickolas Radley) and one contender (Luvuyo Sizani). Clearly, Radley will never get to own the belt because he will not be able to defend it five times. It is even worse with female champions such as Julie “Queen” Tshabalala, who last defended her welterweight title in 2014. There is no-one to defend against.

Former and present SA boxing champions in both the male and female sections who are owed championship belts by Boxing SA after registering required ...
Sport
1 year ago

Those champions of yesteryear that were able to defend five times are owed their belts.

Boxing SA acting CEO Cindy Nkomo said: “The qualifying criteria would be champions who won titles in specific weight divisions between 2001 and 15 March 2020 and who, during this period, have successfully defended these titles five or three times for males and females respectively. The qualifying defences must have also been made with no breaks in between and such boxers must have remained in good standing with BSA during their tenure as champions.”

Ndou, who is now based in Australia, is peeved. “It’s ridiculous that a fighter has to defend the title five times [or three times for female fighters] to rightfully own the belt. This is never heard of anywhere in the world. You win the title, the belt should rightfully become yours. If you lose the title BSA should provide the champion with a new belt,” he said.

“It’s a further insult to hear that most former and current fighters are owed these belts by BSA. If BSA cannot afford to pay for these belts they should look for potential sponsors. The belts are so ugly to start with. They are nowhere near the Old Buck belt fighters used to receive back in the day. I don’t think they even cost more than $500 each.”

Distell – who produced the Old Buck gin – used to sponsor Boxing SA until 2008. When they withdrew it meant Boxing SA had to find an alternative manufacturer for the national belt, which former world champion Isaac Hlatshwayo said doesn’t inspire the same sense of pride in being a national boxing champion because it is decorated with cheap zinc as opposed to gold in the past.

These are fights SA can only dream about

Here are some of those fights I'd pay to see happening before the end of this year, fully knowing that most of them are pipe dreams as the business ...
Sport
1 year ago
Next Article