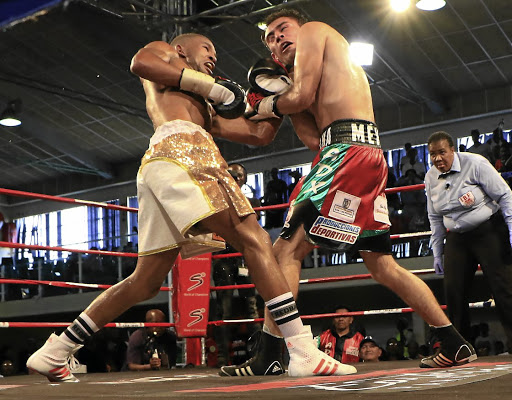 Rumble Africa Promotions has promised to pull all the stops to ensure that its charge Azinga "Golden Boy" Fuzile meets Japanese Kenichi Ogawa in their IBF junior lightweight title elimination bout in the Eastern Cape.

Nomfesane Nyathela, CEO of the East London-based promotions company, said they would approach their financial partners to bring the fight to East London.

"This will be the biggest fight for Azinga and we need to ensure that he fights at home," she said.

"We appeal for financial support to make that happen."

Trainer Colin "Nomakanjani" Nathan said he would love to fight in SA because it would afford Fuzile all the advantage.

"But if we have to go to Japan, it will not be a train smash," said Nathan, who has previously taken his other charge to Japan where Hekkie Budler won two titles.

Fuzile, the IBF Intercontinental champion from Duncan Village, is rated No5, a spot below Ogawa. The winner will be the automatic mandatory challenger to current IBF junior lightweight holder Tevin Farmer from the US.

Nathan and the camp of Ogawa were notified last Wednesday by the IBF championship committee about the elimination bout.

The two camps must begin the negotiations to determine the venue and actual date.

The 22-year-old left-handed Fuzile made his professional debut under Rumble Africa Promotions in 2014.

He is yet to taste defeat after 14 fights.

Said Nomfesane: "If push comes to shove, he will go to Japan to face Ogawa in his turf."

Fuzile, who has never fought outside SA as a professional, is relying on his promoter Thembalethu Ntuthu to pull all the stops to make sure that he fights Ogawa at home.

Azinga “Golden Boy” Fuzile cruised to a lopsided points win over Romulo Koasicha in his first defence of the IBF Intercontinental junior lightweight ...
Sport
3 years ago
Next Article