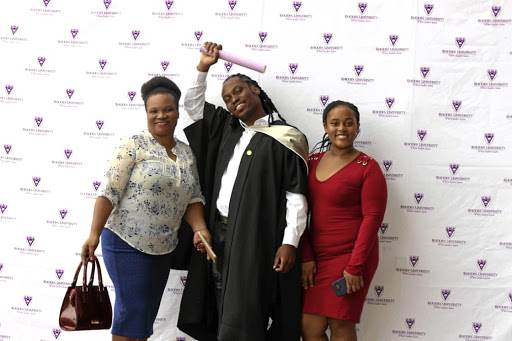 Eight years ago Zolani Bethela worked as a petrol attendant at a BP garage in Makhanda (formerly Grahamstown).

On Saturday, the 26-year-old from Joza township outside Makhanda, graduated with an honours degree in industrial Sociology at Rhodes University.

Bethela, who did not have money to further his studies after matric, said he never gave up on his dream to succeed despite the adversity.

He recalled how one day a car pulled up at the petrol station and he overheard a father scolding his daughter saying she would end up as a petrol attendant if she did not listen.

This, Bethela said, pushed him to consider going back to further his studies.

"I decided there and then to go back to school. However, I had to improve my matric results as I had received a D average," Bethela said

Almost 20 years ago, Ayanda Mafuleka received a bursary to study for her B.Com degree and today she is the Chief Executive Officer (CEO) of the ...
SebenzaLIVE
3 years ago

"Going to university was a dream for me but I couldn't further my studies with my mom's salary as a cashier. I had to find work so as to assist her."

Bethela said he hoped his story will inspire others faced with similar hurdles not to give up on their dreams.

"I am excited that I took that chance because in order to make it one needs education.

"I want to be an inspiration for my younger sister as well. There are a lot of opportunities for her out there and she can only achieve that through education," Bethela said.

Rhodes vice-chancellor Sizwe Mabizela said all the students who graduated had their own unique stories to tell about their journey.

"For some of you, the path to this day has been a long and rocky one, requiring persistence, perseverance and hard work. Others have had to negotiate struggles of financial hardships that left them uncertain at the beginning of each year. However, you've pulled through and a hearty congratulations," he said.