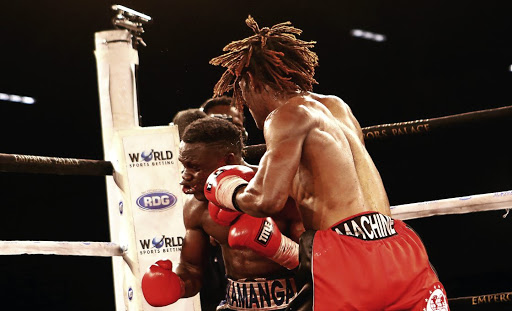 Gauteng boxing trainer Lionel Hunter confessed yesterday that he does not take kindly to defeat.

Trainers generally give their lives to the sport of boxing and sometimes ignore their families.

Hunter is a former professional boxer. His boxer, Clement "Slow Poison" Kamanga, suffered a seventh round stoppage loss to Marios Matamba in Golden Gloves tournament on Sunday at Emperors Palace.

"I am not a good loser. I don't deal with it well, but fortunately my wife Shereen (boxing promoter under Unleashed Combat Sport ) helps me in that regard," said Hunter yesterday.

Hunter feels Mashitoa has chance to win
Sport
2 years ago

Kamanga was doing well until he sustained a cut above his eye. Matamba took advantage and connected with solid shots.

Unable to defend himself, Kamanga found solace from internationally-renowned referee Deon Dwarte who stopped the action.

"Clement needed to keep that guy away, but you know this is boxing. That boy is good but this is not the end of the world for Clement. It is only his fourth loss. We need to learn from our mistakes," said Hunter.

Kamanga said: "I am a bit disappointed but I will be fine. When I got cut, it changed the whole fight. I first had in sparring and I had it stitched. The stiches were taken off on Tuesday. I do not think it had healed properly. I could not see due to sweat and blood."

*Meanwhile, former IBF junior welterweight and IBO and WBF welterweight champion, Australia-based Lovemore "The Black Panther" Ndou will be inducted to that country's boxing Hall of Fame in Melbourne tomorrow.