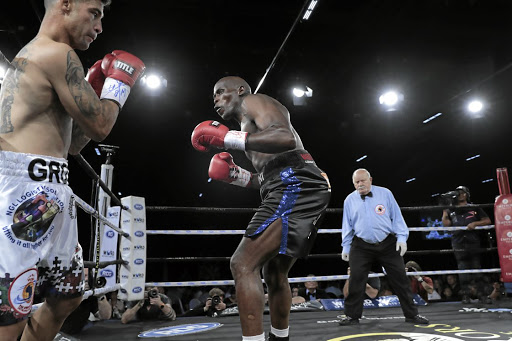 Walter Dlamini and Wade Groth size each other during the WBA Pan African and SA Middleweight title fight. / NICK LOURENS

Dlamini, 38, did it in 42 seconds, the shortest title fight in the history of local boxing.

"The only thing I knew was that Walter would be crowned, just because of his patience, dedication and hard work," said the 56-year-old mentor.

Hunter, a former middleweight and light heavyweight boxer, retired in 1986 and has been honing the skills of fighters since 2016.

"Walter is the oldest boxer in my gym yet he is the fittest. He is very patient. I told him he will be a champion and that we needed time to work things out in the gym," said Hunter.

"He was very patient and he showed me that he believes in himself because he said 'we will do it together'.

"Our plan was not to allow the decision to go on judges against Groth. So we worked on explosive power."

Thabiso "The Rock" Mchunu finally dropped that annoying championship prefix of "former" to his name.
Sport
3 years ago

Dlamini, currently the only national boxing champion from Limpopo said: "I had been waiting patiently to be a champion."

He failed to win the same belt from Christopher Buthelezi in 2014.

"I told you last week that I was going to knock him (Groth). I had seen videos of his fights, then I knew that he was not going to beat me," said the married father of three.

"When Lionel said he was going to push me for the SA title I believed in him and I went into into the gym every day. He kept motivating me," said Dlamini.

"Lionel is not only my trainer but is also like a father to me. Whether it is food or petrol money, he helps me. It is very rare to have such people, especially in boxing."

While Dlamini improved to 16 wins in 26 bouts, Groth, who is trained by Raymond Cerfonteyn, only tasted defeat after seven straight wins.