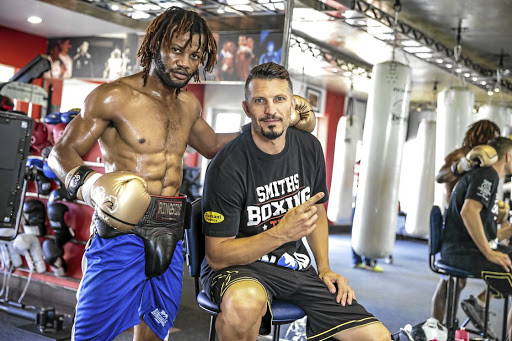 Gauteng boxing trainer Sean Smith refuses to rest on his laurels after producing many SA, World and International champions over the years.

"I am just getting started. I am hungry for success," said the 43-year-old trainer.

Matamba, who was making his debut under Smith, stopped equally competent Clement Kamanga. The 24-year-old newly crowned champion from DRC improved to eight knockouts in 10 wins.

Matamba had been based in the Western Cape under unheralded top trainer Zola Koti, who helped him win the WBO Africa junior welterweight title against Siseko Makeleni in December.

Smith, whose first championship victory was the African Boxing Union (ABU) cruiserweight belt won by Thabiso Mchunu against Danie Venter in 2012, said he first met Matamba at a tournament in East London.

"I had interest in him," said Smith yesterday.

"I said if he needed help he can come and see my gym in Johannesburg. He came here and he liked the environment. We worked together for six weeks before the fight on Sunday.

"I was a bit concerned about a few of his bad habits but I did not want to change too much because of the short time we had together. Luckily, he has the head and brains of boxing. He fought very well, no one has been able to stop Clement Kamanga. They fought hard but Matamba came back very strong and scored with solid punches. I am happy to help him win a title."