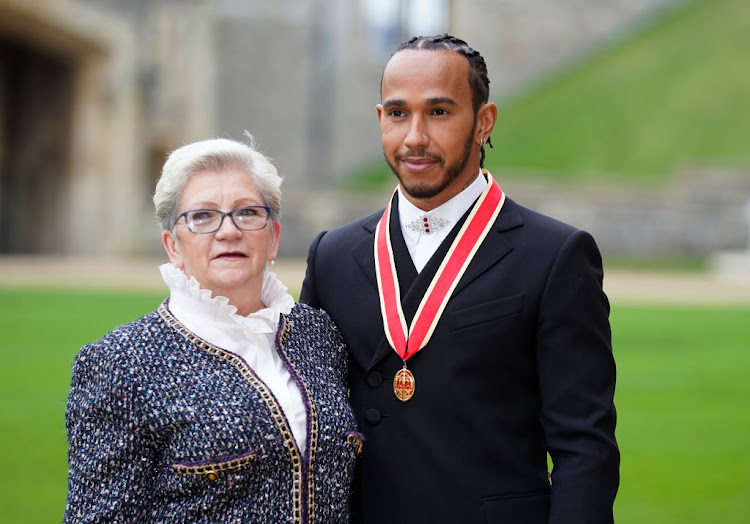 Sir Lewis Hamilton with his mother Carmen Lockhart (nee Larbalestier) after he was made a Knight Bachelor by the Prince of Wales on December 15 2021 at Windsor Castle, England.
Image: Andrew Matthews - WPA Pool/Getty Images

Seven times Formula One world champion Lewis Hamilton said on Monday he planned to add his mother's maiden name, Larbalestier, to his.

Speaking at Expo 2020 in Dubai ahead of this week's season-opening race in Bahrain, the 37-year-old Briton said he was working on the change and hoped to make it soon.

“I'm really proud of my family's name 'Hamilton',” he explained. “Actually, none of you might know that my mum's name is Larbalestier, and I'm just about to put that in my name because I don't really fully understand the whole idea when people get married then the woman loses her name.

“And my mum, I really want her name to continue on with the Hamilton name.”

Hamilton's mother, Carmen, and father Anthony separated when he was two.

Carmen accompanied the Mercedes driver to Windsor Castle in December when he received his knighthood.

The driver will be chasing a record eighth championship this year after losing out to Red Bull's Max Verstappen in Abu Dhabi on the last lap of the controversial last race of 2021.

He said on Monday that winning was not everything and “sometimes when you lose you actually win and grow, and my advice for people is: 'Don't be afraid of failure'.”

Hamilton said during testing in Bahrain last week that Mercedes were behind Ferrari and Red Bull and his car, on current form, lacked the pace to be competing for wins.

Season four of 'Drive to Survive', the Netflix docu-series that has turbocharged Formula One for new and younger audiences, debuts on Friday with the ...
Sport
5 months ago

Michael Masi has been replaced as Formula One race director, the head of the sport's governing body said on Thursday, with Niels Wittich and Eduardo ...
Sport
5 months ago

Formula One's governing body said on Thursday it will announce in March, on the eve of the opening race in Bahrain, the outcome of an investigation ...
Sport
6 months ago
Next Article