Xaba, Mokoka happy with their last race of the season

SA runners going back to the drawing board 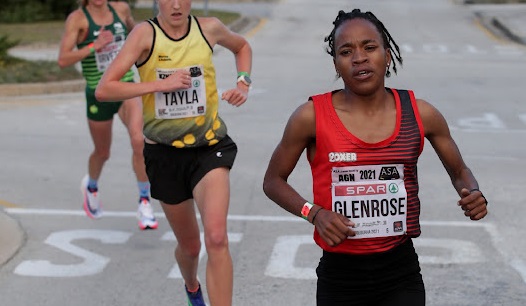 Former training partners Stephen Mokoka and Glenrose Xaba reflected on their season after ending the Absa 12km City Run in Cape Town as the highest placed local finishers on Sunday.

Xaba finished fourth in 40min59sec as the fastest local runner in the women's race won by Jesca Chelengat of Kenya in 40:01.

“It was a challenging race with the strong winds and the route had many hills. I am happy with my last race – it was a difficult year. I was in and out of races. It was not a good year for me. I am happy to end the season with a better performance. I hope that next season I will do better than this. I hope that I will not be troubled with injuries like this year,” Xaba said.

The Boxer running club star said he was satisfied with his performance, insisting he gave it his all against the fast Kenyan.

Mokoka finished in second place in the 10km City Run in Durban on October 31, and he said his season ended the way he wanted.

“We had wind for about 5km, and it killed the rhythm. It played a big role, and I am happy to run 34 minutes under those conditions. Ebenyo took advantage of the wind and opened a gap of 30 seconds and gained more ground. There was no possibility of a fast time and I did not want to waste my energy in the wind. I expected to run 33 minutes and I am going back to the drawing board. I will be back next year,” said Mokoka.

Kenya completed a clean sweep in the Absa Cape Town 12km City Run, with Daniel Ebenyo and Jesca Chelengat clinching the men’s and women’s races in ...
Sport
2 weeks ago

Olympian Precious Mashele has had a season to remember and he will look to end it with a bang at the Absa 12km City Run in Cape Town on Sunday.
Sport
2 weeks ago

Forget about the Athletics SA (ASA) awards and prepare athletes to deliver medals on the world stage. That it is the strong message from the ...
Sport
3 weeks ago
Next Article