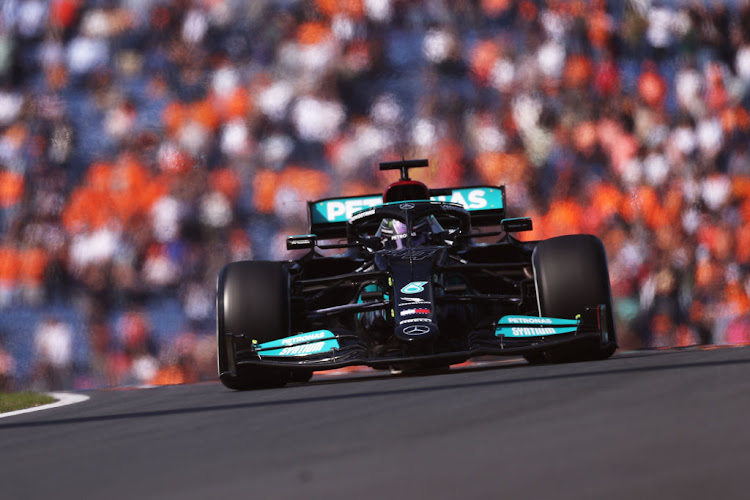 Lewis Hamilton during practice ahead of the F1 Grand Prix of The Netherlands at Circuit Zandvoort on September 3, 2021 in Zandvoort, Netherlands.
Image: Lars Baron/Getty Images

Lewis Hamilton kept home favourite and Formula One title rival Max Verstappen off the top of the time sheets in a truncated opening practice session for the first Dutch Grand Prix in 36 years on Friday.

More than 35 minutes of the hour-long session at Zandvoort's seaside circuit were lost to red flags after Sebastian Vettel's Aston Martin suffered a power unit failure and stopped on track with a trail of oil.

Vettel grabbed a fire extinguisher as smoke came from the back but the car appeared to remain electrically live and could not be removed until it was declared safe by a marshal in protective clothing.

By the time the process was complete, only six minutes remained and a roar went up from the crowd as the cars returned to the track in a final rush.

Seven times world champion Hamilton lapped in 1:11.500 seconds for Mercedes with Red Bull's Verstappen 0.097 slower, after losing time in traffic, and Ferrari's Carlos Sainz third and 0.101 off the pace.

AlphaTauri's Yuki Tsunoda had an early spin that ended his involvement.

All three days have been sold out, with 70,000 spectators allowed to attend on each and nearly all supporting Verstappen or his team at an old-school track with some standout banked corners.

The 23-year-old Dutch driver is by far the most successful in his country's Formula One history, the youngest ever winner and the first to challenge for the title. He is three points behind Hamilton after 12 races.

A plane was spotted overhead during the session trailing a banner declaring “7xWDC. Simply lovely. #TeamLH” in support of Hamilton.

“It's a cheeky opportunity to show Lewis some extra support as he steps into the lion's den here in Max's back yard,” said fan Neil Steele.

“I hope, a small way to get one up on the 70,000 Dutch fans that will surround and outnumber us few Lewis and Mercedes fans here at the track this weekend.”