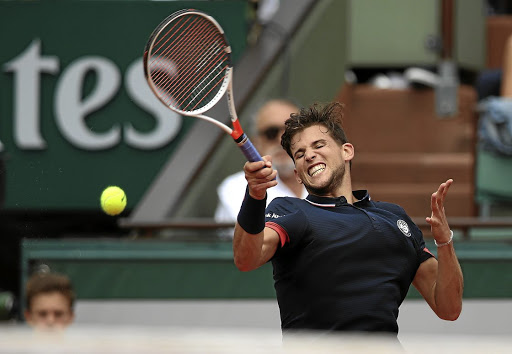 A file photo of Dominic Thiem playing one of his pile-driving returns.
Image: Ian MacNicol/Getty Images

Second seed Dominic Thiem staved off a spirited fightback from Marin Cilic to beat the former champion 6-2 6-2 3-6 6-3 on Saturday and reach the fourth round of the U.S. Open.

Thiem had won both his previous meetings with the 31st seeded Croat and quickly stamped his authority on the evening's final match on the Arthur Ashe Stadium court with two service breaks in each of the first two sets.

"I think the quick start was more because of him," the Austrian said of Cilic, who was taken to five sets in his opener and four in the last round.

Cilic regrouped in the third set, however, and once the former world No. 3 found his range the winners started to flow.

Thiem, who has reached three Grand Slam finals without success, beagn to struggle with his second serve and Cilic broke for the first time in the match to go up 4-2 and then forced a fourth set.

Thiem had to save five break points during the set and converted his only opportunity in the sixth game to nose ahead before sealing the match with a big first serve when Cilic's return found the net.

"He was returning well and set three and four he raised his level a lot," Thiem said in his on-court interview.

"I didn't really play worse these sets but he showed what he's capable of and that's why it was really tough ... in these matches you need a little bit of luck, from time to time it's really close."

Thiem will next meet Canadian Felix Auger-Aliassime, who has not lost a set this week and beat Corentin Moutet 6-1 6-0 6-4 to reach the last-16 of a Grand Slam for the first time.

"I'm not 100% yet. I still have to raise my level if I want to go deeper, especially now against Felix," said Thiem.

"Next round is going to be our first match. He's in great shape, played amazing first three rounds.

"Normally I am capable of doing this in the Slams. Hopefully here as well. Today was a good win against a big champion, great player... that should give me a boost."