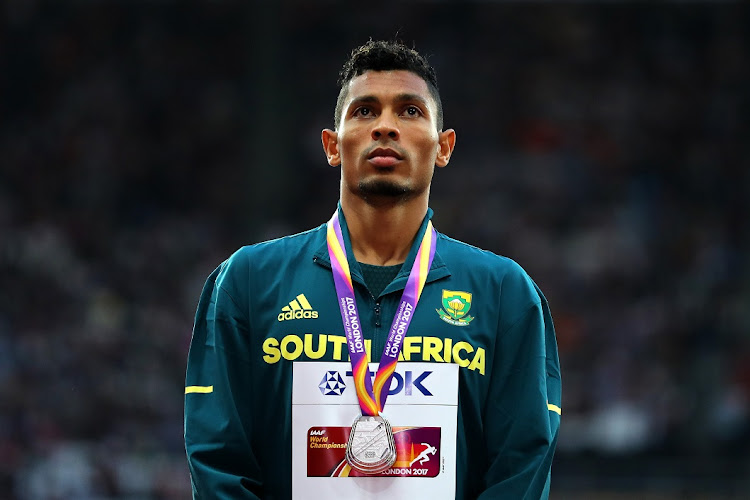 Wayde van Niekerk of South Africa poses with his silver medal for the men's 200 metres at the 16th IAAF World Athletics Championships in London in 2017.
Image: Richard Heathcote/Getty Images

Wayde van Niekerk’s planned comeback to international racing in Italy on Saturday night has been put on hold after he tested positive for Covid-19.

The rest of the SA contingent were negative, a member of the Van Niekerk camp told TimesLIVE.

Van Niekerk, who was feeling healthy and no ill effects, was awaiting the result of a second test to confirm if he is indeed positive.

There were hopes that if the result of the second test is negative, he would still be able to compete in Trieste, about 100km south of his training base in Gemona.

But with the morning nearly gone, it appeared increasingly unlikely he would get to line up if he were to test negative.

Gemona escaped the worst of the Italian pandemic earlier this year with 11 reported cases.

The SA contingent had been tested four times since departing for Italy two weeks ago, including just before leaving the country and just after they had arrived in Gemona.

All the previous tests were negative.

'What's important now is that the world gets better': Wayde van Niekerk

Much-loved SA athletics champ Wayde van Niekerk would this weekend have been counting down exactly two months to the start of the Olympics in Tokyo.
Pic of The Day
1 year ago

Olympic 400m champion Wayde van Niekerk says that while the postponement of the 2020 Tokyo Games due to the coronavirus outbreak was a "downer" the ...
Sport
1 year ago
Next Article