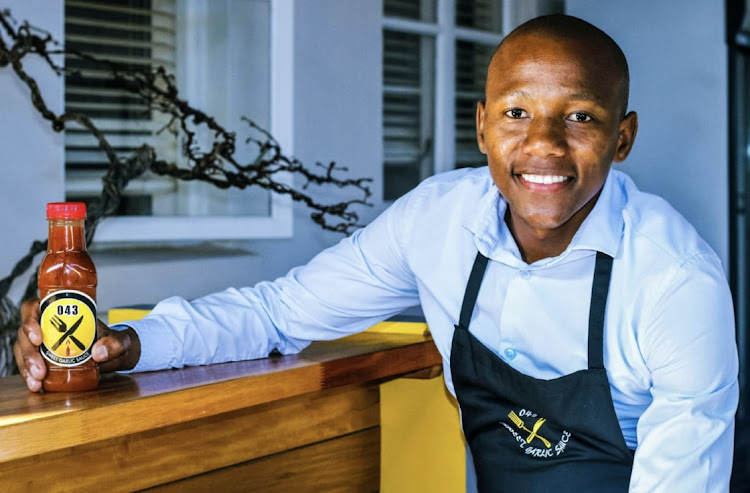 Originally from Idutywa, also in the Eastern Cape, Zekani has had a passion for cooking since high school.

“While studying forestry at the University of Fort Hare, I continued to enjoy cooking and decided in 2017 to turn my hobby into something I could earn money from,” he said.

Zekani has found the perfect recipe for success. He started selling street food, but soon came up with the idea to create a unique sauce.

“I was selling hot dogs, sausage rolls and wings on the streets, but wanted something that would make my food stand out. I started searching the internet for exotic sauce flavours,” he said.

Zekani was drawn to garlic and started refining the taste. “I mix the ingredients, cook it on table boilers, blend it to remove lumps and package it into 375ml bottles with stickers on them.”

His one challenge was preserving the sauce. “I did not know what chemical to use to extend the shelf life until I put more effort into online research.”

Zekani supplies five Spar outlets with his garlic sauce. “My sauce manufacturing is still quite traditional, hence I am only supplying five stores. My production capacity is in its infancy, but I plan to have a nationwide distribution link and to also export overseas.

“I also want to establish stand-alone sauce shops in a number of towns across the country. This will double as a marketing tool.”

Spar Idutywa’s store manager Bonginkosi Ntangashe said the sauce is selling well. “Every week we place a new order because of how fast it goes off the shelves. I think customers recognise it and the price is affordable.”

Zekani has hired three people to help him with the manufacturing process and three merchandisers who work shifts.

He has also started making mint sauce, but it is not yet in retail stores.

Mokwena spices up music career with her own sauce brand

Hip-Hop artist Patricia Mokwena has lit up the stage on fire as she has launched her own sauce brand.
SebenzaLIVE
1 year ago

Prince of burgers wants to be king

Mabe wants to be best in business
SebenzaLIVE
11 months ago