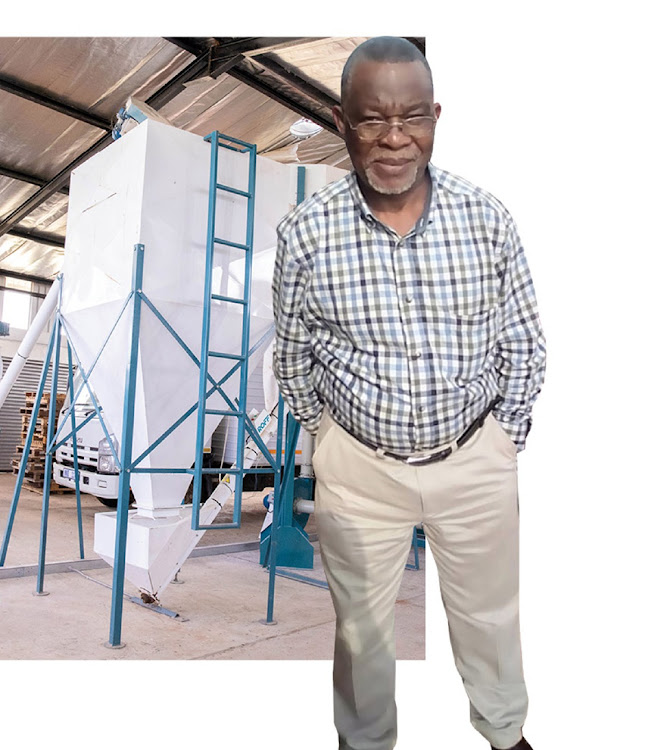 Treasurer of Maphophoma Milling Sipho Nyembe alongside the milling silos that were built by the ADA.
Image: VUKUZENZELE

Maize meal is being produced locally in the Nongoma district in an attempt to grow the area’s economy and put food on tables.

A milling plant is helping to end poverty and create business opportunities for residents of a village in the KwaZulu-Natal region.

Maphophoma Milling processes white maize bought from farmers in Vryheid, KZN and Mpumalanga. The business was formed in 2018 by merging the Maphophoma Ward 11 and Maphophoma Farming cooperatives.

Treasurer Sipho Nyembe, 65, says the 20-member company is able to sell maize meal at a cheaper price because people can buy directly from the mill, which is based at Maphophoma village.

Each day, the mill produces about 50 bags of maize meal, each weighing 12.5kg. The department of agriculture and rural development has provided assistance to the mill.

According to Nyembe, the mill is helping to drive economic development by growing the area’s grain processing abilities. He says that when the mill is able to function at full capacity, it will boost local maize farming.

“The mill and silos here are going to be a catalyst for the development of this area’s economic prospects. This will help create a lot of jobs for the young people of Maphophoma and Nongoma in general. We need more young people involved in running the mill as this is for their own future,” says Nyembe.

The mill works in partnership with the South African Farmers Development Association to get local maize farmers to support their local mill.

As part of its efforts to boost economic development in rural areas, department runs several programmes to fund agriculture initiatives, such as Maphophoma Milling.

“In order to ensure that productivity on land reform and farms continuously increases and positively affects household food security, the employment rate, independence and social stability, the province is investing over R57.2m to kickstart our farmer support package,” says MEC Bongiwe Sithole-Moloi.

The money will benefit 39 low-risk smallholder and commercial farms in all 11 districts.

• This article first appeared in GCIS-Vuk'uzenzele

The National Youth Development Agency (NYDA) is hard at work to open doors of opportunity for young entrepreneurs.
SebenzaLIVE
11 months ago

Siphiwe Mkhatshwa from Nkomazi in Mpumalanga is among the few people who were not only exposed to farming at a very young age.
SebenzaLIVE
2 years ago

The vision of the Eastern Cape government to create sustainable rural economies is becoming a reality.
SebenzaLIVE
2 years ago
Next Article