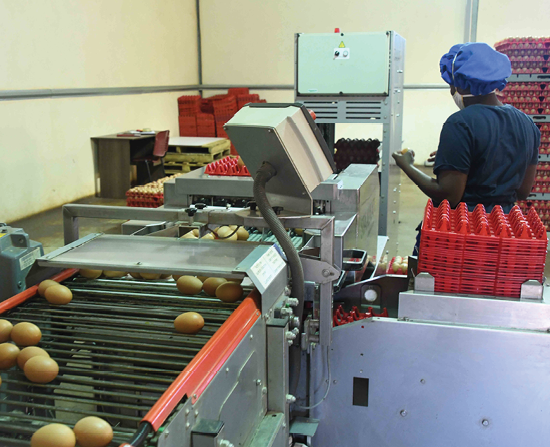 The Bela-Bela Communal Property Association (CPA) in Limpopo is regarded as one of the most successful land claim stories and stands as a beacon of success.

It all started after a successful land claim was lodged in 1998. The claim was accepted by the Land Claims Commission and then published in the Government Gazette on 7 November 2003.

When the Mabula community’s land claim was finalised, they resolved to do things differently and they are now reaping the sweet rewards of their decision.

The Bela-Bela CPA claimed land in the Mabula area of the Waterberg District in Limpopo.

The Bela-Bela CPA started with the construction of the Bela-Bela Communal Property Egg Farm in November 2013. Production started in 2014 with the farm producing 60 000 eggs a day.

Chief Executive Officer of the Bela-Bela CPA Lefa Barrington Mabuela says the farm has grown over the years and now produces more than 110 000 eggs a day.

“We have employed 18 people and 10 of them are young ladies from the community. The plant is highly automated,” he says.

The farm has eight layer houses with capacities of 15 000 laying hens each.

The eggs produced at the farm are collected by Eggspert Eggs which grades, packages and supplies them to chain stores like Pick n Pay, Shoprite and Checkers, among others.

A success of the Bela-Bela CPA is being named the winner of the 2016 Vumelana Governance Award.

The farm also has a partnership with the University of Venda, which sees final year students in the Department of Animal Science visit the farm and be exposed to the day-to-day work environment in agricultural sectors and industries.

While visiting farm, students learn more about poultry farming and the running of the business.

The farm is one of the many farms benefiting from the Poultry Master Plan, which was signed in 2019 during the second South African Investment Conference in Johannesburg.

The Poultry Sector Master Plan was developed in a close partnership between government and a number of stakeholders in the industry, including poultry producers, processors, exporters, importers and organised labour.

The plan is expected to grow jobs in the industry through a number of measures that will be implemented in the coming years.

When the hard lockdown forced Ntombi Mahlangu to work from home, boredom kicked in and she decided to rekindle her love for farming at her hometown ...
SebenzaLIVE
1 year ago

Samson Mahlaba, 73, worked as a farm labourer for 50 years before realising his dream of becoming a commercial farmer five years ago.
SebenzaLIVE
1 year ago
Next Article