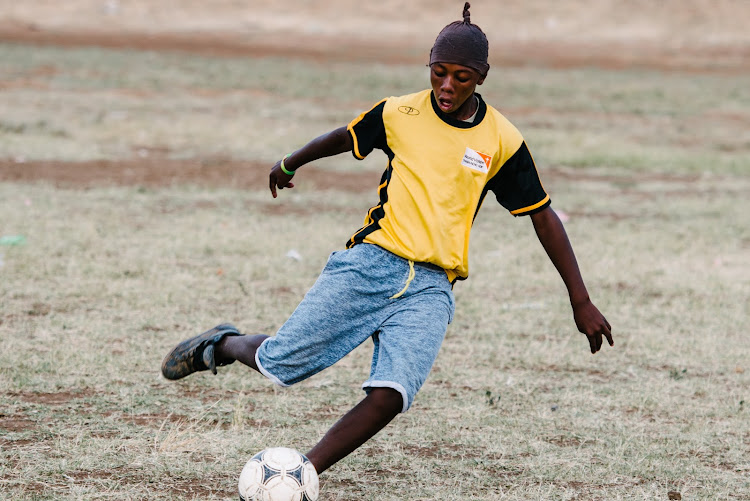 Butterfly Football Club’s goalkeeper is small in stature. He makes up for it with agility and a powerful left boot.

Radar locked on his target up field, he launches a searching ball. On the mark. His winger collects and surges up the right flank, before whipping a low cross in front of goal – tantalisingly close to the studs of an outstretched striker.

Close, but no reward. This time. The team from Thaba Nchu in the Free State will have to do better if they’re to retain the Vision World Cup they won last year.

With a wry smile, Mosela Motsoari looks on from the sidelines of their dusty home turf. Co-founder and coach of the Butterflies alongside her husband, she knows that it will come together on game day.

Winning is a habit that her boys have grown into. For now, she’s more concerned with keeping them focused on their off-field exploits.

The club’s training programme includes compulsory after-school homework sessions, and the benchmark for making it off the bench is a decent academic record.

Working with parents and teachers, Motsoari’s season-long goal is to cultivate among her players an addiction for success in their schoolwork as much as in sport.

“Our motto is build me, build the nation,” says Motsoari, who believes that her community can prosper through investing in children.

“By balancing football and education we are grooming future leaders.” The area desperately needs help in overcoming a number of socio-economic barriers – both Motsoari and her husband are themselves unemployed.

But the couple realise that the most pressing concern is the wellbeing of the youth, selflessly placing this above their immediate personal difficulty.

Their service to their community is an example of the type of leadership that South Africa needs right now.

WATCH | How a heart mama shares the joys of adoption

WATCH | How food can fight a learning crisis? Her meals leave kids hungry for education

Growing children need to eat. But as unemployment continues to soar in South Africa, more families are pushed below the breadline and into extreme ...
SebenzaLIVE
1 year ago

From surviving wars and experiencing revolutions, our elders did it all. But have the heroes of our history books stopped living?
SebenzaLIVE
1 year ago
Next Article