Hip-hop artist says he will knock out Naakmusiq 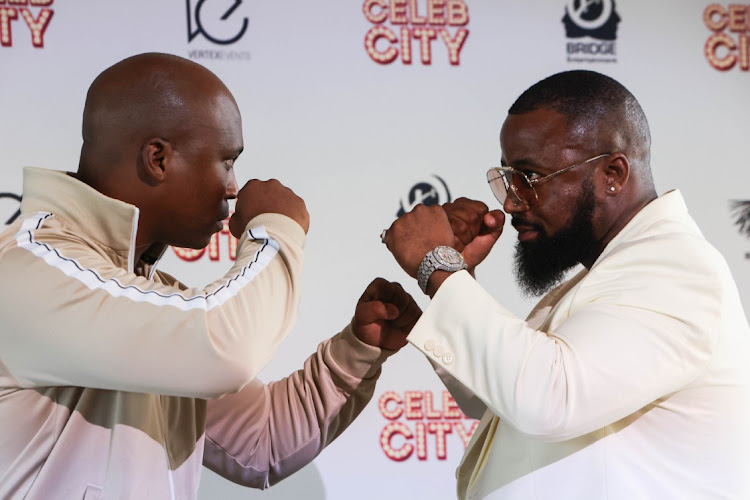 NaakMusiq and Cassper Nyovest face off at the The Venue Green Park in Sandton during the Celeb City, press conference.
Image: Alaister Russell/The Sunday Times

The Summer Love rapper came face-to-face with the Isono actor at a press conference in Johannesburg on Wednesday afternoon.

Cassper, real name Refiloe Phoolo, also called out fellow rapper AKA and house maestro Prince Kaybee, who he claimed “ducked and dived” over his challenge to get into the ring to settle a score.

“Personally, the fight I really wanted was with AKA but I don’t think that’ll ever happen. I mean, Naak is stronger than AKA, so I’m really going to struggle to find someone else to battle should I win,” he said.

“The other person I wanted to fight was Prince Kaybee but he’s busy babysitting or doing something else. I feel like Kiernan [Forbes, or AKA] and Prince Kaybee deserve to get an a** whipping.”

Cassper also hopes to one day take the boxing idea to the world stage and battle the likes of Nigerian stars Davido and Burna Boy.

"I don’t have beef with anyone in Nigeria. I saw Davido boxing the other day and I could see he’s got moves, but I don’t know if he’d be able to step it up in the ring,” Cassper  said.

“But Burna Boy, on the other hand, looks strong. It would be quite dope to fight him. We could even fill up the O2 Arena in London and have the whole world watching us battle it out.”

In preparation for the match, Makubalo said that he had to go on a strict diet and put in double shifts at the gym.

Cassper, on the other hand, felt he had an advantage because he had already fought Silk Talk last December.

“Cassper has being boxing for a while... he had a slight advantage but I know I am a sports person and whatever I put my mind to, I win,” Makubalo said.

“Training wasn’t easy, especially with the tough schedule I have, but being on a strict diet and sticking to my training routine will gain me the advantage I need to knock Cassper out.”