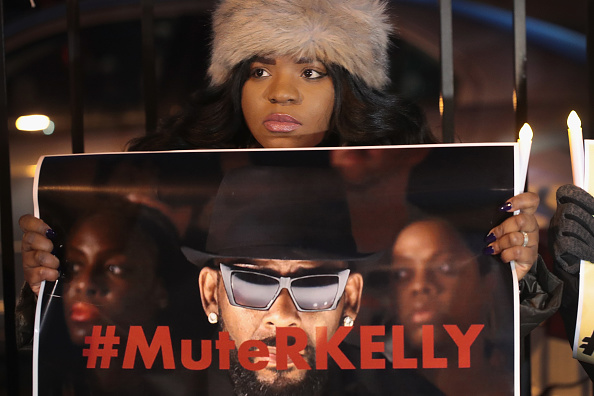 Demonstrators call for a boycott of R. Kelly's music after allegations of sexual abuse against young girls were raised on the highly-rated Lifetime mini-series 'Surviving R. Kelly'.
Image: Scott Olson via Getty Images

With documentaries, plays and other narratives about sexual harassment allegations against some of the most powerful people in the entertainment industry due to be released this year, we have outlined what you need to know about the #MeToo movement.

On October 5 2017, the New York Times published an explosive article detailing film producer Harvey Weinstein’s decades-long sexualabuse and predatory behaviour rampage. Five days later, The New Yorker published an article with allegations from 13 more women. Although not featured in the original articles, Angelina Jolie and Gwyneth Paltrowhave since spoke about their harassment at the hands of Weinstein.

Social media takes off with #MeToo

The term “Me Too” was coined by Tarana Burke in 2006 to help sexual violence survivors. After the publication of the above articles,Alyssa Milanorevived the term for the age of social media by asking those who had experienced sexual assault or harassment to tweet #MeToo. The hashtag would go on to become a movement as women - and men - came forward with their stories.

Suddenly there was a plethora of accused, as victims came forward, naming some of the biggest personalities in Hollywood as sexual predators. The likes of Kevin Spacey, James Franco, Brett Ratner and Morgan Freeman have been accused.

Top female Hollywood stars formed the anti-harassment movement Time’s Up just over a year ago. Itaims to raise legal defence funds for survivors, asks people to take an anti-harassment pledge and seeks a 50-50 gender balance within Hollywood studios.

Oprah Winfrey brought the Golden Globes audience to their feet as she made a powerful speech, accepting the Cecil B DeMille Lifetime Achievement Award (IBTimes UK, Jan 8, 2018)

The 2018 Golden Globe Awards highlighted the #MeToo movement when attendees wore black in solidarity with victims of sexual harassment and assault in the entertainment industry and others wore Time's Up pins. Oprah gave a rousing speech, praising the empowered women who had stepped up to tell their stories.

On May 30, the journalists who broke the Harvey Weinstein story were awarded the 2018 Pulitzer Prize forPublic Service for their “explosive, impactful journalism that exposed powerful and wealthy sexual predators…thus spurring a worldwide reckoning about sexual abuse of women”.

In January, Lifetime shocked the music world when it debuted the six-part documentary Surviving R. Kelly. While John Legend was the only other Hollywood A-lister to feature in the documentary, many others have since spoken out such as Neyo, Chance the Rapper and Meek Mill. The Crime & Investigation Channel on DStv (channel 170) will be screening the documentary from today (February March 10.

Where are we now?

There have been other documentaries released exposing the misdeeds of famous people such as The Harvey Weinstein Scandal, which will also air on the Crime & Investigation Channel on February 13th while another Weinstein documentary, Untouchable, premiered at the 2019 Sundance Film Festival. Weinstein has also inspired a play called Bitter Wheat that will premiere in June in London.

On the other hand, one of Weinstein's earliest accusers, Rose McGowan, has also been the subject of documentaries. Citizen Rose and Rose McGowan: Being Brave (which will also air on DSTV in February) follow the story of the actress and her activism in Hollywood in the age of #MeToo. Other documentaries such as Leaving Neverland or films like On the basis of Sex, continue to place the spotlight on our fraught global culture.

2019 will continue to explore the #MeToo movement and we are here for it.