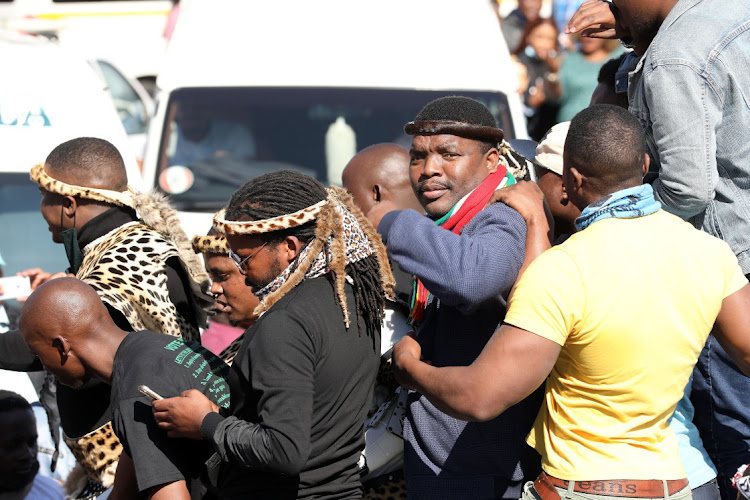 When celebrities like Ngizwe Mchunu stand in public spaces and utter words which could incite violence, their actions might influence young people who look up to them as their role models, says the writer.
Image: Veli Nhlapo

When the mother bird sees imminent danger, she doesn’t warn her children verbally. But she takes action by flying away and her children follow suit.

They say, actions speak louder than words. When celebrities like Ngizwe Mchunu stand in public spaces and utter words which could incite violence, their actions might influence young people who look up to them as their role models. Recently most young people were arrested for looting and damaging properties in Kwa-Zulu Natal and Gauteng provinces.

My advice is: you cannot solve problems by causing problems. We cry of job scarcity, but we destroy businesses which create jobs for us. We cry of untarred roads, but we destroy existing tar roads. We cry of shortage of schools, but we torch existing schools. But part of this problem is created by our so-called honourable leaders and celebrities.

I do acknowledge that the former President, Jacob Zuma fought in the struggle to liberate our country. But one’s fame shouldn’t fuel fury in volatile situations. Words coming out of our mouths have a potential to build or burn up the whole nation. Why burn the whole house just because you want to get rid of the rat?

According to my understanding of the judiciary system, when one is summoned to appear before the court or Commission of Inquiry, one must just cooperate even though there are some magistrate who seem to be harsh with him. Humility counts a lot when you appear before the courts and your humility doesn’t mean you’ll be humiliated with the harshest verdict.

I still recall former president Jacob Zuma’s words to Zondo, he said, “If you’re nasty to me, I’ll be nasty too”. But the biggest mistake Mr. Zuma committed was when he flatly refused to appear before the Commission of Enquiry without any substantial reason. Hence, the Commission had no option but to issue the warrant of his arrest so the police could go and put him in correctional centre for his attitude to be corrected.

But I fail to understand why Msholozi opted to sit in the cold cell instead of just availing himself before the Commission. Perhaps, he had a good reason, but part of his reason is that if Zondo didn’t recuse himself, he wouldn’t appear before him at all.

In his Covid-19 speech, President Matamela Cyril Ramaphosa promised to freely give cash to the citizens like Father Christmas.

But for me it doesn’t really make sense to give people money and not create jobs for them to work for it. In other words, the President concede to the fact that his ruling party is failing to create jobs for skilled, semi-skilled qualified legion of young people who roam the streets and drown their worries in drugs and alcohol.

Now there is high rate of teenage pregnancy stimulated by the child grants received from our government.

Now there is high rate of teenage pregnancy stimulated by the child grants, and teens ageing prematurely in the clutches of nyaope.

The four accused who appeared in courts in Gauteng for allegedly instigating a week of deadly violence “are lower than low hanging fruit”.
News
9 months ago

“I have been called all manner of expletives, with commentators hoping that I will, and I quote, 'die a slow and painful death'," Buthelezi said.
News
9 months ago

Malema wants DA to retract and apologise for incitement allegations

EFF leader Julius Malema wants the DA to retract and apologise for allegations it made that he incited violence last week, and is threatening to sue ...
News
9 months ago
Next Article