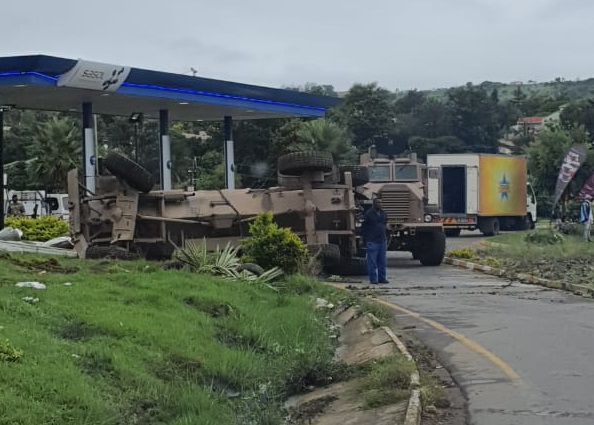 The military vehicle was trying to avoid a taxi which was driving in the wrong lane when it crashed.
Image: REZA

A defence force member was injured and admitted to hospital after a military vehicle crashed in Mthatha, Eastern Cape, while trying to avoid a taxi.

SANDF spokesperson Capt Thabo Sello said the 10 soldiers who were travelling in the Casspir, a mine-resistant ambush-protected vehicle, were from the 14 SA Infantry Battalion.

Sello said they were on their way to report to their deployment point in Mthatha when the accident happened.

“There was a taxi who was driving in the wrong lane and the driver of the military’s vehicle was trying to avoid the taxi when it crashed and rolled.”

Sello said one of the soldiers was injured and admitted to St Mary’s Hospital in Mthatha.

“It veered off the road and crashed into a signpost of one of the fuel filling stations there.”