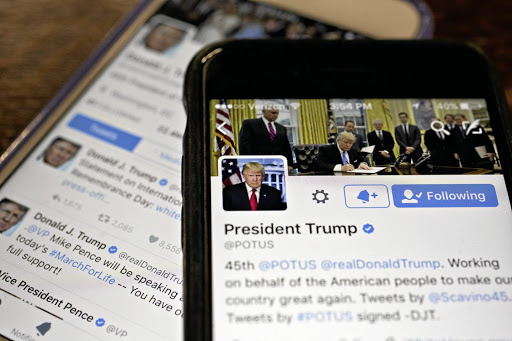 The US President Donald Trump tweets an average of 11 or 12 times a day./ Andrew Harrer/Bloomberg/Getty Images

Donald Trump, the US president, tweets an average of 11 or 12 times a day. His tweets are about anything, from US politics to American football and reality television. He often posts tweets insulting leaders of other nations.

With close to 54 million followers around the world, he is a real Twitter mega-star. Given the fact that he uses the platform to make his most important policy pronouncements, it is no surprise that his posts have become as important as the traditional White House presidential press briefings.

Yet journalist Daniel Dale from the Toronto Star pointed out something quite astonishing. Since becoming president, Trump had never mentioned the word "Africa" in his tweets.

This must mean that the continent does not feature much in the mind of the First Citizen of the world's greatest super power.

And when he did finally mention the continent on Wednesday night it was, as Dale correctly put it, "to express support for white people on the recommendation of white nationalists".

Dale, of course, was referring to the US president's Twitter post in which he said: "I have asked Secretary of State @SecPompeo to closely study the South Africa land and farm seizures and expropriations and the large scale killing of farmers."

He also wrote that the "South African Government is now seizing land from white farmers".

The tweets directing secretary of state Mike Pompeo to pay close attention to our land reform issue was seemingly inspired by a Fox News programme in which host Tucker Carlson basically accuses President Cyril Ramaphosa of changing the constitution and grabbing land from white people simple because of their skin colour.

One is often struck by similarities between Trump and an erstwhile South African president. Their love for television is one of them. Talk has it that Julius Malema and Zwelinzima Vavi would both still be wearing ANC t-shirts were it not for their habit of spoiling the then preident's mood by appearing on his favourite television news program criticising his government.

Political analyst Professor Somadoda Fikeni has applauded Pretoria’s reaction to the Trump tweet‚ saying it was the “most mature response”.
News
2 years ago

Carlson's "exclusive investigation" into SA's land question was so one-sided and inaccurate that no fair-minded person, especially not a president of a country as powerful as the US, should take it seriously. The script could have easily been written by apartheid apologists at AfriForum. But then again Trump has his own immediate reasons for aligning himself with right-wing groupings within the US and abroad. Much has been said over the past 24 hours about the possibility of the US president having decided to use claims of "attacks against whites" in SA to deflect public attention in the US from the troubles threatening to prematurely end his presidency.

Opponents of real land reform back here at home are already using Trump's tweets to dissuade the country from going ahead with the current parliamentary process investigating whether the constitution needs to be amended to explicitly allow for the expropriation of land without compensation.

But we would be making a major mistake as a nation if we abandoned the current process as a result of Trump's passing attention. Since becoming president, he has shown no interest in our country or continent. He has not even seen it fit to appoint an ambassador to Pretoria. Seemingly, when it comes to us, he prefers to outsource the ambassadorial duties to AfriForum and the likes.

By next week, Trump would have forgotten about South Africa. We will still be confronted by a racially skewed land ownership regime that would continue to threaten the long-term stability of our republic.

For our own sake, let us forget about Trump and the ultra-right, and work on finding a workable solution to a crisis that has engulfed our part of the world since colonialism.