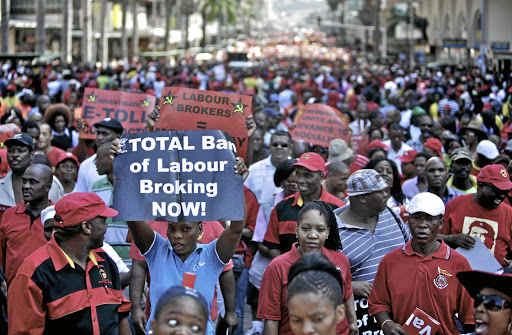 The governing party continues to fail its own people. The delay to ban labour brokering that has been described by trade unions as modern-day slavery is unacceptable.

Surely, the ANC is aware that exploitation in the labour market has been ongoing since the time of the colony. For colonists cheap, even free, labour was the most valuable commodity after land and minerals. This was not the case only in SA.

During the period of Spanish rule in South America, Bartolome de las Casas, a Dominican priest, not only berated the settlers' residency in towns but also how they coerced the inhabitants to work for them.

He expressed scorn at how the settlers "stole the natives already scarce foodstuffs" while making "them labour night and day on his own interest, without rest whatsoever".

Today, labour as a
commodity still thrives in SA in the name of job creation through labour brokering. For many years, trade unions have called for its total ban because it cannot be regulated and I agree.

Whereas the recent judgment handed down by the Constitutional Court may rightfully be described as "a major step in the battle against banning labour brokers totally", it is questionable that it has taken the apex court to dent the crimes of the labour broker. Why is the governing party so lax? That labour brokers exploit the poor and unskilled has never been in dispute. Furthermore, labour brokers have sustained their existence through nothing but lies.

Is this the end of labour brokers as we know them?

The labour broker industry will probably downscale and adjust its business model.
News
3 years ago

We know that labour brokers maintain that many companies do not have the expertise to handle security or cleaning services, for example, and as a result "companies turn to staffing solutions firms to meet their requirements".

But this cannot be further from the truth because many companies are contracted with labour brokers for services the companies managed for years. Labour brokers simply enticed companies by offering the same services, for half the price.

Labour brokers have a pool of desperate jobseekers who they are able to exploit while successfully avoiding the red tape. Companies want temporary employees to perform the same job as permanent employees for a fraction of the cost.

Take for example a news report that labour brokering company Adcorp hired workers at Kellogg's for several years, in one instance for as long as 16 years. Kellogg's as a result managed to avoid paying benefits, including equal pay, for many years.

Outsourced cleaners and security guards’ lives are not about to change dramatically after a Constitutional Court ruling on labour brokers.
News
3 years ago

While the Constitutional Court judgment forces labour brokers to operate within the prescripts of the law, a total ban is still desired because they will continue to operate as dodgy agents and find ways to avoid the law and continue to exploit workers.

It is a shame that the governing party, pro-poor as it claims to be, has done nothing about this exploitation. However, it should come as no surprise because it took it 24 years to finally take steps to return the land to the natives and this is only because it has run out of promises to make to the people.