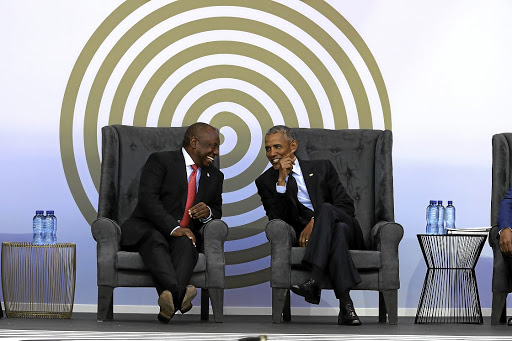 When former US president Barack Obama gave his lecture last week I hoped our President, Cyril Ramaphosa was listening attentively.

Obama spoke extensively on democracy and how it was under threat. While democracy may not be perfect, Obama said "real democracy best upholds the idea that government exists to serve the individual and not the other way round," and "democratic legitimacy," he said, comes from the bottom up, not from the top down.

Obama emphasised the importance of knowing the lives of those who are struggling, because "democracy means being in touch and in tune with life as it is lived in our communities."

At best, we have to resist cynicism talk, Obama said. This is so, since talk about the end of democracy is widespread and the rise and triumph of tribalism and strongman politics is gaining momentum.

Obama's lecture reminded me about the Ingonyama Trust and how Ramaphosa betrayed democracy. The problem in South Africa is that we forget very quickly, perhaps to our own demise.

Our president has not addressed the fundamental issues raised by the High Panel. As a statesman, surely he must be concerned, I would hope, about the abrogation of people's land rights, which was the main reason that the trust ought to be dissolved and the Ingonyama Trust Act be repealed.

But perhaps the simplest way to describe what bothers me is that the land debate is taking place in the absence of female voices and their advocacy, which I find extremely daunting.

It is vital that when taking into account any contentious issue that may emerge from tribal authority regarding land, that we be cognisant of the deep-rooted gender-concentrated issues that remain wide open.

Obama emphasised how "women and girls around the world continue to be blocked from positions of power and authority, prevented from getting a basic education and are disproportionately victimised by violence and abuse. They're still paid less than men for doing the same work." And again, the Ingonyama Trust issue swamped my thoughts.

To this extent, I prowled the report further and found that it highlights the special vulnerability of women in rural areas, where they live under the rule of traditional leaders and their lives are governed by customary law.

In the first place, the report notes that "rural women's existences are determined by unequal power relations in which context women have very little power with which to negotiate their physical, social and material security".

Single women, widows, divorcees and those without sons, were sidelined to the extent that land may not be allocated to them in accordance to customary law. Those who possessed such land or property remained at risk, because the authority could confiscate it without even so much as giving reasons, at any given time.

The High Panel found that divorced or widowed women faced further abuse when they returned to their birth homes when their marriages ended. They were often made unwelcome and evicted by their brothers.

A woman needed to be represented by male relatives in order to be considered for any land allocation.

In terms of custom there is no need to consult women or wives "on decisions regarding land use or transactions," because women are still treated as minors in their families and communities, read the report.

And so, should Ramaphosa fail to curb, check and challenge tribal authority, the status quo will remain.

His reaction to an all-embracing customary power, which excludes people's rights, is despite the fact that customary authority is regressive.
Opinion
3 years ago
Next Article