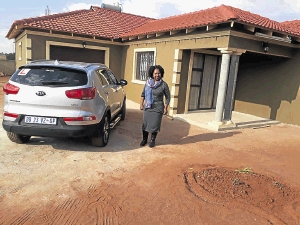 Jeremia Ngwenya's wife, Sibongile, stands next to the Kia Sportage whose computer box was allegedly ruined at the dealership he had taken it to for repairs.
Image: Supplied

Jeremia Ngwenya's Kia Sportage only had a starter problem when he towed it to Gold Reef Kia Motors for repairs. But upon collection, he could not drive it home as a Kia employee had allegedly damaged its computer box when they washed the engine.

Ngwenya, 55, of Lenasia, south of Johannesburg, told Consumer Line he bought the car for his wife second hand from Kia early last year. Though it was a 2014 model, it seemed fairly new as it only had about 28000km and still had its warranty and motor plan.

Ngwenya said the dealer should be held liable for the damage caused by the employee who washed the engine without Ngwenya having requested it.

"The employee should have known that splashing water on an unprotected computer box would damage it," Ngwenya said.

He said his car had stopped unexpectedly when he had it towed to the Kia dealership in July.

The service adviser had told him that he needed to repair the car's wiring connector pin, and replace the battery and a few other things related to the starter problem, Ngwenya said.

After they had carried out the required repairs and had the car tested, they then fetched him from his house to take delivery of the car. "I waited for an hour to take delivery but was later told they are sorry it was impossible as there was a problem which needed to be attended to," Ngwenya said.

He said they did not disclose what was the problem until a few days later when he called to enquire. It was only then that they told him about the damage done to the computer box, he said.

"They said the damage will have to be repaired at my cost , which they put at R36000. They also said the car had been previously involved in an accident but that information was never disclosed to me when I bought the car," Ngwenya said.

Fazal Khan, a service manager at the dealership in Ormonde, Johannesburg, told Consumer Line the accident was the reason behind the car's problem with starting. He said the car had eight active electronic accident codes which they discovered when they worked on it. He said their technician checked and found the pins on the ECU bent, which means the ECU had been tampered with. "It seems we repaired pins and the vehicle started, but when we tested it again the ECU lost communication again and refused to start," Khan said.

He said it was normal practice to clean the engine after a service, and they have a sign warning customers about it.

Khan added that Ngwenya needed to remove his vehicle from premises, and they will return his money. "He needs to take the vehicle back to where he bought it, as it also has incomplete service history and the warranty is not active."

The industry ombudsman of SA is now investigating the matter.

Ordering goods from internet has its pitfalls.
Opinion
3 years ago
Next Article