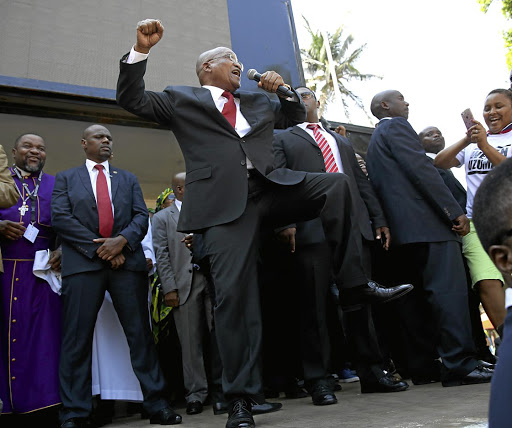 They sang, they danced, they chanted slogans and punched the air with angry fists. The songs and the slogans were not exactly the same, but the sense of déjà vu was palpable.

Whereas Umshini Wami was the favourite song when Jacob Zuma appeared in court facing rape charges back in 2006, when he appeared in another court facing corruption charges last Friday, the song sung by him and his followers this time around was Sengimanxebanxeba.

Loosely translated, it speaks of a man whose body is crisscrossed with gaping wounds and horrific gashes; he is bleeding profusely from wounds inflicted by people he thought were friends and brothers.

That's Msholozi's forte; he knows how to play the victim. He is a master at pulling the heart strings of ordinary folk who see in him a man who, like them, is at the receiving end of the jackboot of authority.

When he tells the masses that he is bleeding from wounds inflicted on him by people he thought were friends, the masses can relate.

They are, after all, unemployed and poor, and in the new president they see a rich man who consorts with whites who continue to lord it over the poor black masses.

The delicious irony, however, is that while in power, Zuma himself consorted with those rich whites; but most significantly, gave chunks of the country's wealth to his friends, the Gupta family.

Various accounts by government personalities also show that it was in Saxonwold that some cabinet appointments were made.

"Sengimanxebanxeba, nginje nje," sings Zuma. The masses take up the song, they dance, they throw themselves on the ground and roll around, their faces mirroring the pain they are feeling. Like Zuma, they are bleeding; their bodies are screaming out in agony from the deep wounds visited on them by those in power.

When Zuma pauses from the song, he tells the interviewer that there are people out there "abangibophela amanqina enyathi", using deep poetic Zulu to illustrate the depth and evilness of the plot against him.

In the popular imagination, Zuma is the victim. And South Africans, in fact human beings in general, love the underdog.

So deep is his appeal that the ANC in KwaZulu-Natal is now split down the middle - with a group that is now called Zuma Rebels reportedly plotting to oust President Cyril Ramaphosa. Sources have revealed that the so-called Zuma Rebels are considering working with the Black First Land First party - led by the peacetime revolutionary-turned-Gupta fetch-and-carry boy Andile Mngxitama.

Whether this plot to oust Ramaphosa is true or not is immaterial. The reality is that a seed has been planted in the popular imagination that Zuma has been wronged. This wrong needs to be righted. But at what cost?

My nightmarish fear is that the split within the ranks of the party might soon turn violent. Political differences within the ANC in that province have in the past resulted in bloodshed.

It is a thousand pities that the masses are so caught up with the notion of Zuma being the victim that they are blind to the crocodile tears that he is shedding.

Tempers are running high, but perhaps it's not too late for people to step back and look at the picture properly.

Cool heads are called for.