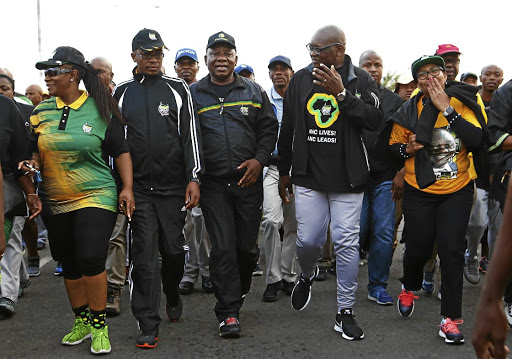 ANC president Cyril Ramaphosa, middle, should look to many bright sparks the party has, such as Parks Tau and David Makhura, both flanking him, to forge a strong leadership for ANC. / Masi Losi

As the Independent Electoral Commission undertook its voter registration drive ahead of next year's general elections at the weekend, political parties went out to charm the electorate.

ANC president Cyril Ramaphosa and his deputy David Mabuza set out on a mission not only to woo voters but also the leader of the EFF Julius Malema.

The ANC, like any incumbent, fears loss of power. Ramaphosa and Mabuza sense the serious threat the EFF poses, and suppose they could neutralise it by winning Malema over.

This overture is ironic given that Ramaphosa was chair of the disciplinary appeals committee that dismissed Malema's appeal of his expulsion from the party in 2012.

Back then, Ramaphosa along with the committee was convinced that Malema's expulsion was well founded.

They deemed Malema's actions to be so grievous as to be sufficient grounds for the ANC to disassociate itself from him. In the present context of the ANC's renewal, the call for Malema's return to the ANC fold betrays a deep sense of insecurity. It does very little to inspire confidence in the ANC's leadership.

It makes Ramaphosa look weak. He comes across like a man so desperate to distance himself from his predecessor that he is willing to disown his own past convictions.

This then strengthens the argument that he did not act independently on Malema at that time, but took the opportunity to enter into Zuma's good graces to further his own ambitions.

Ramaphosa must be careful that in his haste to countervail his opponents, that he does not end up strengthening their hand against him and constraining his own agency and the ANC's policy space.

The EFF is already gloating over getting the ANC's ascension to its bid to amend the constitution on the land question. This comes on the back of the ANC caucus in parliament agreeing to append the EFF's motion of no confidence in former president Jacob Zuma in February when it seemed unlikely that he would resign.

The ANC is ceding too much political ground to the opposition. This overture could be interpreted as an acknowledgement of a paucity of new ideas and of lack of confidence in its own abilities to deliver on the promise of transformation.

It sends the message that those who left the party to form new parties depleted the ANC's supply of initiative and good leadership. This is not a good signal for voters.

Why should the electorate continue to consider the ANC a viable option when it calls on the opposition to join its own ranks?

Ramaphosa and Mabuza's utterances are also an indication that the fear of losing power may lead the ANC to pander to the EFF's whims in a way that may undermine the need for the governing party to take the lead on sensitive issues.

The ANC may be tempted to use land reform opportunistically as an instrument for populism in a bid to beat the EFF at its own game. But this is the time when the ANC must display a maturity and magnanimity akin to the Mandela years to guide the country through a tricky minefield, that if mishandled, could result in devastating political and economic consequences.

The EFF can afford to be reckless and extreme because they are not a party in government. It can in large part escape responsibility and evade accountability because the buck does not stop there.

The ANC should be weary of trying to outdo the EFF but rather focus on regrouping and building on the momentum of change it has built up since Ramaphosa's inauguration.

The ANC would do well to heed party chairman Gwede Mantashe's counsel not to invite departed members back... it discredits the ANC's own electoral appeal. It makes the ANC a billboard for the opposition. That is counterproductive.