'How dare we judge Naledi Chirwa because she chooses to subscribe to a deity?' 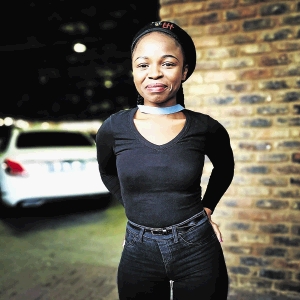 Okay, let me cut to the chase, I watched the video of EFF MP Naledi Chirwa attending Shepard Bushiri’s Church.

Yes the blurry one where she is being prayed for and prophesied over and responds: “I receive Papa”.

The same footage where she is seen falling (as one does in charismatic churches). The clip about which she was mocked and ridiculed this past weekend, yep, that one.

A part of me wished I hadn’t watched it actually, it somehow felt like an invasion of her privacy. Maybe it’s because I too have had sacred moments in holy temples, in full view of the cameras. I remember hoping and praying that God would not only hear my prayers but also protect me from the spotlight in my time of weakness.

To be honest, I don't know why churches record people worshiping, weeping or praying. No consent required. Boom you’re on TV. It’s rather unsettling.

Maybe churches figure that those who have nothing to hide, hide nothing. Why else would one not want to be seen on TV, right?

Wrong, some people are in sensitive positions and such things must be managed carefully.

Perhaps the videos serve as an advert of some sort: “Come to such and such a church, you see, here we have a whole Public Protector lifting up holy hands or Member of Parliament slain in the spirit”.

The bigger the brand, the greater the impact. I’ve since made peace with the filming.

I’ve reasoned that in order for churches to reach as many people as they can, they must be seen to be effective.

Surely as a government communicator I can understand that it is not enough to do the work, one must also be seen to be doing the work. Now that I have rationalized why churches record such intimate moments of reflection, testimony and thanksgiving.

Let's talk about why we bystanders who are on the outside looking in, feel the need to judge Naledi.

Look, I have my reservations about Bushiri, the jury is still out as to whether or not he is a Prophet but what business is it of mine what Naledi chooses to believe? Am I not the same person who is of the view that a Jewish virgin gave birth to my savior?

Some of us believe that our dead relatives can intervene in our daily affairs while others revere cows as sacred. All of our faiths are a little absurd to those who hold opposing views.

Religion is by its very nature subjective. Like beauty, the truth about the spiritual realm is in the eye of the beholder. And guess what?

So Julius Malema was referring to Naledi Chirwa when he said, ' you will do those things of kneeling there before Bushiri. Because some of you even thanked him for taking you to Parliament.' pic.twitter.com/AiLBJVXMyK

Like a tapestry, all these belief systems – as ludicrous as some may seem – are interwoven into our constitutional right to religious freedom. Our laws not only protect our right to believe what we will, they actively promote it!

How dare we poo poo Naledi’s right to believe whatever she chooses. Who are we to undermine her because she acknowledges a greater power at work in her life? What gives us the audacity, the nerve and the gall to call into question her feminism and politics because she chooses to subscribe to a deity?

Chief Albert Luthuli, Mama Winnie Mandela – to name a few – were both staunchly religious and political to the bone. Martin Luther King Junior, Malcolm X – again, deeply religious and radical in their disposition.

Why does her faith delegitimize Naledi? Help me understand. Bar the few times I’ve seen her tiny frame in the parliamentary precinct, I don’t know Ms Chirwa.

I have however been privy to her sharp mind as I read her tweets and occasionally hear her mediated speech. I am of the view that we as a country are privileged to have such bright young people in our midst.

Think back to when you were her age, what were you up to? I won’t answer that question out loud, lest I embarrass myself.

I can however tell you what I was not doing: I was definitely not taking up space in my country’s sociopolitical landscape as a member of parliament!

As is the nature of youth, it is often accompanied by folly. Without being ageist, I have no doubt that Naledi will falter from time to time, she is after all human.

However, I would hope that when that day comes, those around her, who know better, will do better by lovingly showing her the way, instead of crushing, shaming and damning her to oblivion.

Naledi has in her the makings of a leader. She has the raw talent, the chutzpah and the wherewithal to leave an indelible mark on her country’s politics.

Good on her for recognizing that and praying it into existence! Go girl! Gone are the days when young women shrink back, play small and shy away from responsibility. If you want it, go and get it!

Name it and claim it if you must. If it is yours, go on and take it! Can I hear an amen? Somebody say: “I receive mama”!