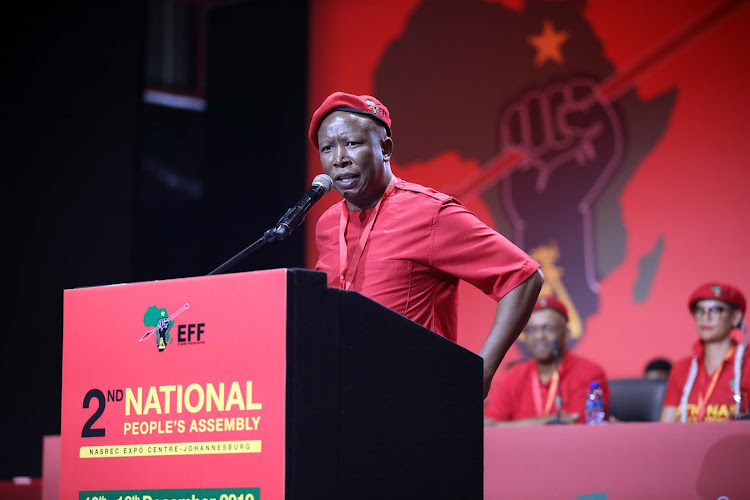 “Don’t kneel before me. I don’t want that,” were the strong words by the newly re-elected EFF leader Julius Malema to delegates who knelt before him at the party’s elective assembly on Sunday.

A few delegates marched to the stage in song and knelt before Malema who said he did not want anyone kneeling before him as he was not the EFF.

Malema also threw shade at the party’s members of parliament who, after getting elected to the National Assembly, thank Prophet Bushiri for placing them in the house.

“You do those things of kneeling there before Bushiri because some of you even thank him for taking you to parliament. I’m not your father, Papa Bushiri, I’m not Papa or anyone,” he said.

He told the thousands of delegates who on Saturday night re-elected him as their commander-in-chief a story about a Venda friend of his who made his wife kneel before him when being served food. He told the delegates that he told the friend that if that ever happens again he would stop going to his home.

“And I told that guy if that’s how you are going to treat her like that in my presence then I’m no longer going to come to this house because no human being must kneel before another human being, it’s not possible,” Malema said.

Julius Malema will lead the EFF for at least the next five years.
News
1 year ago

EFF leader Julius Malema has called out the party’s national leadership for not carrying out their duties.
News
1 year ago

He also tore into the now former EFF secretary-general Godrich Gardee who, in his organisational report presented on Saturday night, told delegates that the EFF would die if Malema was to get arrested. He made a comparison to the Pan Africanist Congress which failed following the arrest of its leader Robert Sobukwe.

Malema said Gardee was giving “them” - referring to the National Prosecuting Authority that’s pursuing several charges against him - ideas to arrest him in pursuit of ensuring that the EFF dies. Gardee was replaced by Marshall Dlamini as the secretary-general.

“Never kneel before anyone, never personalise the revolution," said Malema.

"The EFF is not my kitchen, I’m going to leave this organisation especially this position, one day. It must not disappear with me like [Robert] Sobukwe. SG writes there in his report that the EFF is going to die if Malema gets arrested like they did with Sobukwe. It’s giving them an idea that they must arrest me now... These people are going to arrest me because they want to kill the EFF,” Malema told the delegates.

He also rejected calls for delegates to dictate which areas he should be visiting as his decisions to undertake such visits were underpinned on the election results among other things. This came after some delegates, during discussions of the organisational report, called for Malema to visit their branches as potential EFF voters want to see him.