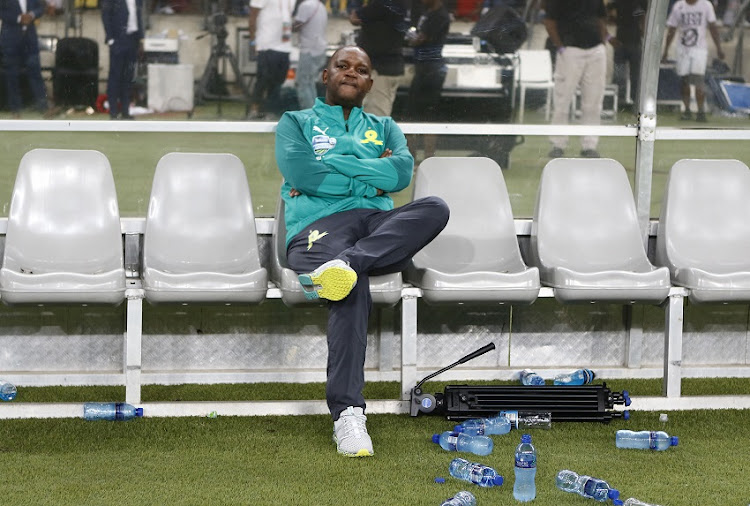 Pitso Mosimane has excused himself from the decision to block Jerome Brockie from playing against Mamelodi Sundowns.

The New Zealander belongs to the Brazilians but is out on loan at Maritzburg‚ and is contractually not permitted to play against his principal club.

As a result the striker was nowhere near the action at Moses Mabhida Stadium on Saturday night when Sundowns beat Maritzburg 2-1 in the Telkom Knockout final‚ and Mosimane collected his ninth piece of silverware since joining the Brazilians seven years ago.

To put Brockie’s absence for Maritzburg in context‚ rightback Nyiko Mobi‚ whom the reigning Premier Soccer League (PSL) champions signed from Free State Stars‚ was shipped out on loan to Stellenbosch United and is permitted to play against the Brazilians.

Mobbie was on the pitch when Sundowns beat Stellenbosch 3-1 in a PSL clash at Loftus Versfeld last week.

Asked why Brockie was prohibited from playing against his parent club‚ Mosimane pleaded ignorance.

“I am not a part of that‚ I have to be honest. You know me – I am a straight talker. I did not know and I even asked Yogesh [Singh‚ Sundowns’ general manager] ‚” Mosimane told TimesLIVE.

“I said‚ ‘Why?’ He said‚ ‘No‚ it is a clause. We feel that if they [the on-loan club] pay [his salary] for him‚ he must play. But if Sundowns pay for him‚ Sundowns feel: how can we play for a player to score against us’.”

Mosimane declared himself not to be a fan of the practice of prohitibing on-loan players from playing against their parent club.

“It is not for me. You know I’ve seen it happening in Atletico Madrid with [Thibaut] Courtois‚ the goalkeeper. I’ve seen Bidvest Wits doing it‚ I’ve seen SuperSport United doing it – I am not promoting it‚” said Mosimane.