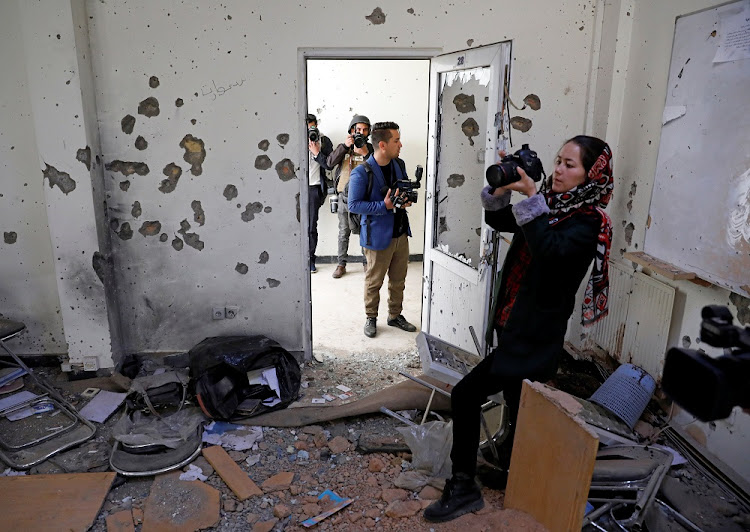 Afghan journalists film inside a classroom after yesterday's attack at the university of Kabul, Afghanistan November 3, 2020.
Image: REUTERS/Mohammad Ismail

The death toll from an attack on Kabul University has risen to at least 35, two government sources said on Tuesday, as students protested over the attack and the country marked a day of mourning.

Gunmen barged into the university on Monday, in what was the second attack on an educational institution in the capital in just over a week. Both have been claimed by Islamic State.

The two sources told Reuters that most of those killed were students and around 50 more people were wounded, some of them breaking limbs while jumping from windows to flee from the attack during morning classes.

Officially the death toll stands at 22 with 27 wounded, according to the interior ministry.

The country held a day of mourning on Tuesday, with many flags flying at half mast.

Around 100 students gathered outside the university to protest that peace talks with the insurgent Taliban in Doha were not leading to a reduction in violence.

"Although we see these kinds of attacks on a daily basis, there are still ongoing peace talks with them, which is really terrible," said one protesting student, Zaryab Paryani.

The Taliban has denied any part in the attack, which follows a blast last month - also claimed by Islamic State - that killed dozens of students at a tutoring centre.

But some Afghan government officials, including First Vice President Amrullah Saleh, have accused the Taliban of involvement.

Taliban spokesman Zabihullah Mujahid on Twitter accused the government of "taking (the) public for fools".

Negotiators from the Afghan government and the Taliban are holding talks in Doha with the aim of brokering a peace deal as the United States withdraws troops.