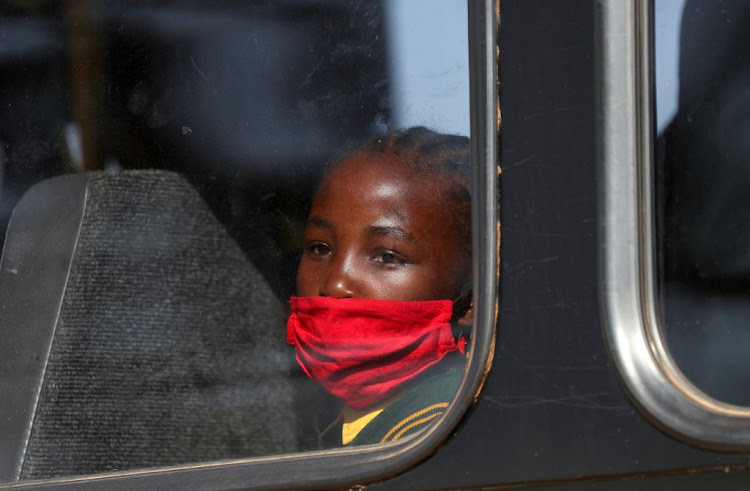 A girl wearing a face mask looks on through a bus window in Eikenhof, south of Johannesburg, as schools reopen during the Covid-19 lockdown in South Africa, on August 24 2020.
Image: REUTERS/Siphiwe Sibeko

The new coronavirus was already wreaking havoc in wealthy Asian and European nations, and a United Nations agency said in April that, even with social-distancing measures, the virus could kill 300,000 Africans this year.

In May the World Health Organisation (WHO) warned that 190,000 people on the continent could die if containment measures failed. Yet as the world marks 1-million Covid-19 deaths, Africa is doing much better than expected, with a lower percentage of deaths than other continents.

The continent's case fatality count stands at 2.4%, with roughly 35,000 deaths among the more than 1.4-million people reported infected with Covid-19, according to Reuters data as at late Monday. In North America, it is 2.9% and in Europe 4.5%

Hard-hit countries such as Italy and Britain have recorded fatality counts of 11.6% and 9.0% respectively, compared to 1.6% for Ethiopia, 1.9% for Nigeria and 2.4% for South Africa, the continent's worst affected country.

"Based on what we have seen so far it is unlikely that we are going to see anything at the scale that we are seeing in Europe - both in terms of infections and mortality," said Rashida Ferrand, a London School of Hygiene and Tropical Medicine professor working at the Parirenyatwa Group of Hospitals in the Zimbabwean capital Harare.

Experts say that some Covid-19 deaths in Africa probably are being missed. Testing rates in the continent of about 1.3-billion people are among the lowest in the world, and many deaths of all types go unrecorded.

South Africa saw some 17,000 extra deaths from natural causes between early May and mid-July, 59% more than would normally be expected, according to a July report from the South African Medical Research Council. That suggests the death toll from Covid-19 could be significantly higher than the official figure, currently over 16,000, researchers say. Even so, there is wide agreement that Covid-19 fatality rates have not so far been as bad as predicted.

Why? Scientists and public health experts cite a number of possible factors, including the continent's youthful population and lessons learnt from previous disease outbreaks. African governments also had precious time to prepare due to the relative isolation of many of their citizens from airports and other places where they could come into contact with global travellers.

Some scientists also are exploring the possibility that a tuberculosis vaccine routinely given to children in many African countries might be helping reduce deaths from Covid-19.

Another theory being considered is whether prior exposure to other coronaviruses including those that cause the common cold has provided a degree of resistance in some of the very communities once thought to be most vulnerable.

"There is a lot of circumstantial evidence," Salim Abdool Karim, a South African infectious disease specialist who has advised the government on Covid-19, told Reuters, "but there is no smoking gun."

The virus hit Africa later than other continents, giving medical personnel time to set up field hospitals, source oxygen and ventilators, and learn from improvements in treatment elsewhere.

"We got the gift of time," said Thumbi Mwangi, senior research fellow at the University of Nairobi's Institute of Tropical and Infectious Diseases. "We had an amount of preparation that others did not."

One reason could be that international travel is limited in many African countries, and travelling domestically can be more difficult than on other continents, Matshidiso Moeti, WHO regional director for Africa, told a news conference on Thursday.

The continent's governments have also battled deadly infectious diseases such as Ebola, which killed more than 11,000 people in West Africa in 2013-16. So officials took notice when the new coronavirus started spreading around the globe rapidly early this year.

Within a week of Kenya reporting its first case, schools were shut, incoming travellers had to undergo a mandatory quarantine and large gatherings were banned. Nigeria, Africa's most populous nation, imposed a ban on interstate travel and a curfew. Many of its land borders had already been closed since August 2019 to cut down on smuggling, which helped fight the pandemic too.

South Africa introduced one of the world's toughest lockdowns in late March, when the country had confirmed just 400 cases.

"Africa brought down the hammer earlier in terms of coronavirus lockdowns," said Tim Bromfield, regional director for East and Southern Africa at the Tony Blair Institute for Global Change, a UK-based think tank.

Research has found that the risk of developing severe Covid-19 increases with age.

Chikwe Ihekweazu, director general of the Nigeria Centre for Disease Control, attributed his country's relatively low case mortality rate in part to the fact that the majority of patients were between the ages of 31 and 40.

Scientists in several countries including South Africa are testing whether the century-old Bacille Calmette-Guérin (BCG) vaccine, widely used on the continent against tuberculosis, provides a degree of cross-protection.

BCG vaccines have been shown to protect against other viral respiratory illnesses, and a study published in the scientific journal Proceedings of the National Academy of Sciences in July found that countries with higher vaccination rates for tuberculosis had lower peak mortality rates from Covid-19.

Studies have also started in South Africa and Zimbabwe to assess the impact of past exposure to other coronaviruses.

More than half of Africa's urban population is concentrated in slums, where access to water for hand washing is scarce, and physical distancing is near-impossible.

Diseases spread rapidly under such conditions, but some scientists wonder whether that may have been an unexpected boon in this case. There is some evidence that T cells developed by the body's immune system after exposure to other common cold coronaviruses could help fight off Covid-19.

"I would say that is at least a plausible explanation as to why there are different levels of resistance to the virus in different populations," said Thomas Scriba, an immunologist and deputy director of the South African Tuberculosis Vaccine Initiative.

Others are more sceptical.

"All other regions have been exposed to coronaviruses, have poor people and slums and have received BCG vaccination," said Humphrey Karamagi, team leader for data and analytics at the WHO's Africa office. "We are most probably looking at a mix of multiple factors working together - and not a single magic bullet."

For Sam Agatre Okuonzi, from the Arua Regional Referral Hospital in Uganda, the doomsday predictions were informed by entrenched prejudices, including that the continent is prone to disease.

"Covid-19 has shattered a lot of biases about disease in general but also about Africa," he told Thursday's briefing. "The severity of the pandemic has not played out in line with the outrageous predictions."

Mpumalanga MEC for economic development and tourism, Pat Ngomane has tested positive for the coronavirus.  In a statement on Sunday, Ngomane says ...
News
1 year ago

Active Covid-19 cases have shot up by 6% in Gauteng since the lockdown regulations were dropped to level 1, an increase "noted with concern" by the ...
News
1 year ago
Next Article