Why Covid-19 can run rife in meatpacking plants 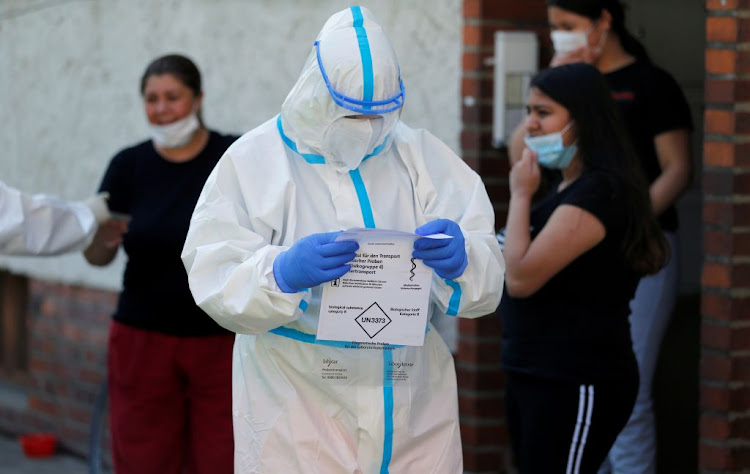 A member of a mobile testing unit of the German Army and German Red Cross is seen after testing residents for Covid-19, following an outbreak of the disease at Toennies meat factory which remains under lockdown, in Guetersloh, Germany, on June 22 2020.
Image: REUTERS/Leon Kuegeler

Meat-processing plants around the world are proving coronavirus infection hotspots, with an outbreak at a factory in Germany leading to Guetersloh becoming on Tuesday the first area in the country to be ordered back into lockdown.

More than 1,500 workers at the Guetersloh plant tested positive for the virus that causes Covid-19, while outbreaks have also hit meat and poultry plants in Britain in recent days.

In many rural parts of the US, meatpacking plants have been the main source of infection. On April 28, President Donald Trump signed an executive order to keep such factories open, warning of a potential threat to the US food supply.

The meat industry is particularly susceptible to coronavirus infections because of the nature of the work: intense physical labour, conducted indoors at close proximity to other workers.

"Their work environments - processing lines and other areas in busy plants where they have close contact with coworkers and supervisors - may contribute substantially to their potential exposures," the US Centers for Disease Control (CDC) says of meatpacking workers.

Pietermaritzburg's city call was closed on Monday after a staff member tested positive for Covid-19.
News
1 year ago

The CDC maintains a list of recommendations for factories, including steps to keep workers apart such as staggered arrival times and breaks, supplying workers with masks and hand sanitiser and making sure tools are disinfected.

It says factories should take workers' temperatures on arrival and send those with fevers home.

As the number of Covid-19 cases continues to rise across the Eastern Cape, the office of the premier says it is intensifying efforts to contain the ...
News
1 year ago

Conditions on the factory floor itself are also not the only issue. Meatpacking workers often share transportation and housing once their shifts are over.

In Germany, for example, many are migrants from poorer EU countries such as Bulgaria and Romania, often housed in large dormitories where the virus can spread.

"Some of these factories have on-site or nearby accommodation where there are several people in each dormitory, they may be transported on a bus to the site of work, and they will be indoors together all day," said Michael Head, an expert in global health at England's University of Southampton.

In the US, by the end of May, the UFCW labour union estimated that at least 44 meatpacking workers had died of Covid-19, and that at least 30 meatpacking plants had to be temporarily shut down, impacting more than 45,000 workers and contributing to a 40% reduction in pork slaughtering capacity.