'Get under the tables': One SA leader Mmusi Maimane reeling after brazen robbery at Cape Town restaurant

'They just pulled out their guns. They didn’t even cover their faces.' 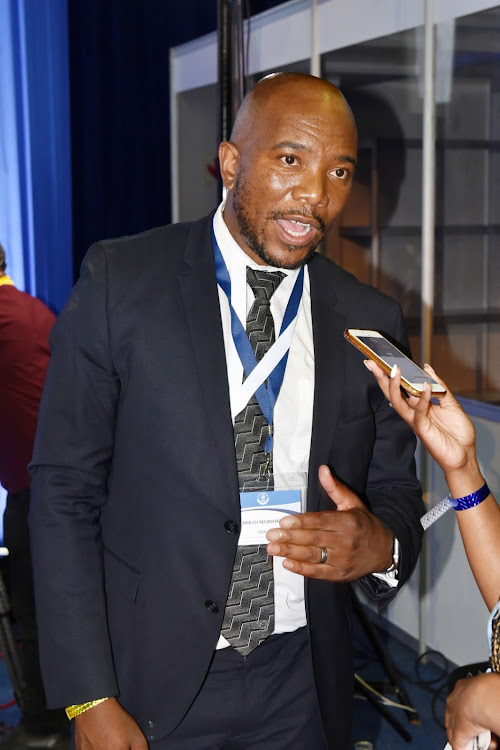 One SA Movement leader Mmusi Maimane bemoans crime in SA after being one of the people caught up in a Cape Town restaurant robbery.
Image: Freddy Mavunda

One SA leader Mmusi Maimane had a sleepless night, still in shock after being robbed at gunpoint in a Cape Town restaurant on Wednesday evening.

Maimane told TimesLIVE on Thursday that he was sitting with his brother-in-law, who lives overseas, when three gun-wielding men entered the Claremont establishment and ordered everyone to lie down and robbed them. The assailants took his watch.

“I don’t want to mention the name of the establishment but it is in Claremont. It’s a restaurant-type bar. You can have food there. I have been there a couple of times. We arrived at the place around 7pm and these young men entered. Three of them and [they] literally climbed on top of the counter and told everybody: ‘Get underneath the tables.' It was like that one movie scene you have seen a hundred times.”

Maimane said the gunmen had posed as patrons. Then, table by table, they grabbed what they wanted from traumatised patrons.

“The waitress opened for them and asked if they wanted a table for three,” he said.

“They just pulled out their guns. They didn’t even cover their faces. They were so confident. We took out our belongings and placed them in front of them. They took watches and all the valuables they wanted.

“They were distracted by an armed response company that arrived and left and ran away. Police also came about five minutes later.”

Maimane said there was a pregnant woman among the patrons.

“One woman was pregnant and the other was panicking,” he said. “It’s a nice little bar and people had laptops and these guys just took them. I am grateful for two things. One is that no-one tried to be a hero. Second, no-one was carrying his or her weapon.”

Maimane said the screams after the gunmen left were disturbing. “I have never had people screaming so much. We were all traumatised,” he said.

“The police came and secured the area and we knew that police were not going to find them. They took a watch ... but these things don’t matter because people didn't lose their lives. I am fine. I don’t want to dramatise the situation. The thing about this country is that you have to learn from the worst-case scenario. They could have murdered you or did this or that. We live with this trauma as a country.”

'Even pupils' lunch boxes not safe from zama-zamas'

Residents of West Village in Krugersdorp where eight women were raped by a group say they have lived in fear long before the incident that shocked ...
News
2 weeks ago

He said he had a conversation with his brother-in-law after the incident about crime in SA.

“I asked him if he would consider living in SA. Of course, it does not inspire confidence in anyone to invest and come and live in the country,” he said.

“We have to do better. Crime is a serious driver of disinvestment. You can say all you like but financial capital will not move to this country until we deal with crime. You reflect on what if we were sitting in a tavern in Soweto and those guys came in and just shot everybody? I think we need to [consider] whether we are effective at fighting crime. If we are not, it’s another job killer. People won’t want to come here for tourism purposes. Crime will hurt us.”

He said he struggled to sleep after the incident.

“I didn’t sleep last night because it had just happened,” he said.

“That is the trauma. You see someone holding a gun in front of you and you wonder what if I was reaching for my wallet and he shoots me? Funny enough, when we left the place after police arrived to check if the gunmen didn’t drop anything, an officer from an armed response company pulled out a gun and asked what I was doing there.

“I wore a tracksuit and had my hands in my pocket because it is cold in Cape Town. I said I was one of the victims. At the moment I am OK but I am not guaranteed I will always be OK because trauma has its own way of coming back.”