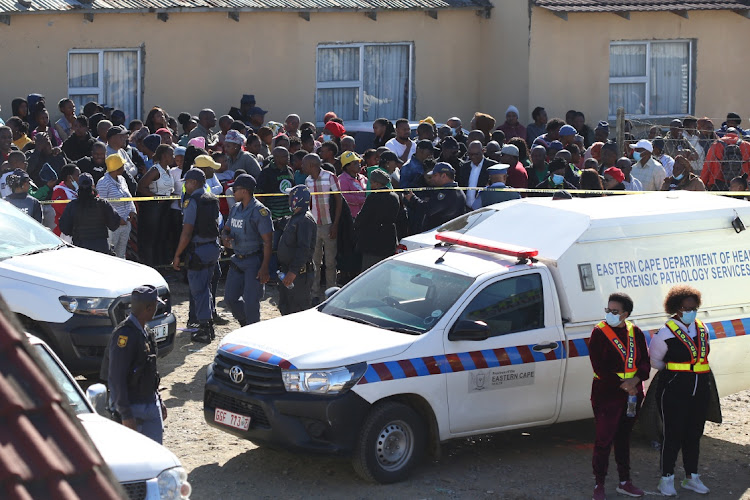 Residents and family members gather outside the Enyobeni tavern in Scenery Park, East London, where youngsters lost their lives in the early hours on Sunday.
Image: MARK ANDREWS

These are the words of a 14-year-old from East London who had told her family she would be attending a friend’s birthday party on Saturday night.

She is one of the survivors of the tragic event that claimed the lives of 21 young people in the early hours on Sunday at Enyobeni tavern in East London, Eastern Cape. She is not being named as she is a minor.

“I’m having flashbacks of seeing some of the people who died right in front of my eyes. I’ve never seen this in my life,” she said.

The girl, who sounded traumatised, could hardly finish a sentence without taking a break.

“I’m struggling to do anything. I can’t sleep, I can’t eat. I get flashbacks of what happened at that tavern. I have to face my parents who know I lied and are disappointed in me. I’m also disappointed in myself because I can see lying doesn’t help and I could have died there,” she said.

One thing she is unable to get out of her mind is the face of another girl who died in front of her.

“The girl whispered to me and said, ‘please assist me, I’m dying’. Immediately after saying this, she gasped. I can say that was her last breath,” she said.

“Her face and her last words keep coming to me. They are always popping up in my mind, even when I’m just sitting. It’s too painful.”

She said they were trying to get out of the tavern for fresh air, but moving was difficult because it was overcrowded.

According to the girl, patrons started falling down after talking about struggling to breathe. She said a strong and suffocating smell erupted at the venue.

I’m not sure what was sprayed in there, but some said security sprayed something

“I’m not sure what was sprayed there, but some said security sprayed something.”

Before this, she had spent the afternoon with her friends and their schoolmates at the home of one friend, not far from the tavern. They arrived at the tavern just after 10pm.

They went in with their own alcohol, she said.

“We had mixed our own drinks. Some had gin mixed with Sprite and the others had brandy mixed with Coke,” she said.

A local musician who performed at the tavern on the night, Lihle Mapasa, shared a video of his performance on Twitter shortly before the mayhem, captioning it, “moments before I almost lost my life”.

According to his account, people died due to suffocation.

On his Facebook page, he said he believed there was not enough security at the tavern.

“This is what I saw. People suffocated and started collapsing. It was very hard to breathe in the small space by the door. Enyobeni did not have enough security by the door. Imagine two people stopping hundreds of people pushing back and forth because some wanted to come in with force while others wanted to get out quickly due to pepper spray,” Mapasa said.

The memorial service for the victims will be held on Saturday at 12pm, followed by a joint funeral service on Wednesday July 6. This was confirmed by Agcobile Bungu, ward committee for youth and sports, art and culture.

The SA Democratic Teachers' Union says the Enyobeni tavern tragedy is a stark reminder of the "appalling conditions" township youth live under where ...
News
1 month ago

‘I called him my son’; ‘Her beautiful smile’; ‘His laugh was contagious’: Schools pay tribute to tavern victims

Schoolmates and teachers of the youths who died at the Enyobeni tavern in East London are mourning their losses.
News
1 month ago
Next Article