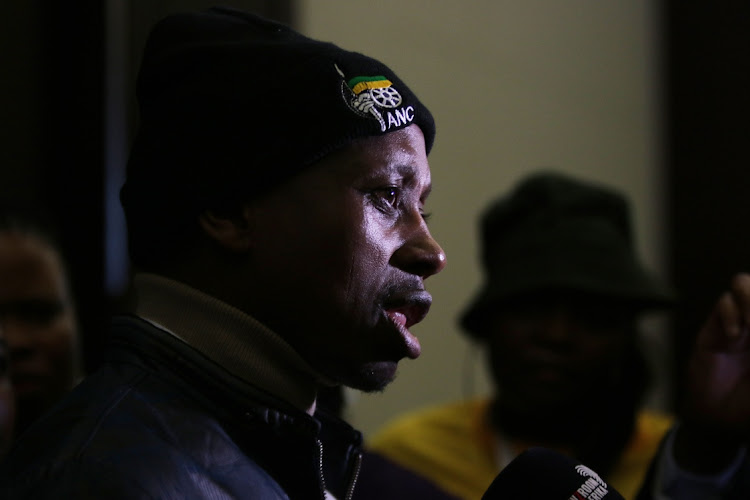 Andile Lungisa speaks to the media in East London during the conference.
Image: Michael Pinyana

Andile Lungisa has made it to the ANC Eastern Cape provincial executive committee (PEC).

Lungisa, who contested and lost the provincial treasurer position to Zolile Williams, a municipal manager at Joe Gqabi district, was announced as one of the 30 additional members of the PEC.

The announcement was made by ANC national spokesperson Pule Mabe on Tuesday following the province's five-day conference that ran into the early hours of Tuesday.

Speaking at the ICC in East London, Mabe read out the name of the additional members which included Lungisa and also those who were on Oscar Mabuyane's side who was re-elected as provincial chair.

Mabe announces the names of additional PEC members. Andile Lungisa who was part of Babalo Madikizela's slate is the only one from that lobby group who made it. Lungisa lost out on the position of provincial treasurer. #ANCEC pic.twitter.com/qfsqvhZl8M

Lungisa, who was on the slate of Babalo Madikizela, who lost to Mabuyane in the chairperson race, was the only one from the Maliya faction that made it as an additional member.

On making the cut, Lungisa said he was fine with the outcome.

Asked if most of those who contested against Mabuyane were not being punished as their names were missing from the list, Mabe said there was no such thing.

Ngcukayitobi answers about the future of some of the MECs missing from the list of additional members. He says the province is going through a performance assessment as they're in the mid-term. #ANCEC pic.twitter.com/cj6axqBQt9

"The names read out here are the names of the comrades who made it. We appreciate that some comrades put up their hands to serve as additional members but did not make the cut. There were 84 candidates but only 30 could make it," he said.

Those who did not make the cut include transport MEC Weziwe Tikana-Gxothiwe, who contested the deputy secretary position, and Madikizela, who served as provincial treasurer in the last term.

After losing the contest, Madikizela announced he would be resigning as public works MEC next week, effectively resigning from government.

On the pending resignation, provincial secretary Lulama Ngcukayitobi said they would deal with it when it reaches them.

"There's been no discussion on that," he said.

As Mabuyane called Ramaphosa to the podium on Monday night, he emphasised that the president should be given a second term and quipped: “But you must ...
News
2 weeks ago

President Cyril Ramaphosa has urged ANC members in the Eastern Cape to discuss the calibre of people they want to occupy leadership positions.
News
2 weeks ago

Re-elected Eastern Cape ANC provincial chair Oscar Mabuyane has reiterated his and the province’s support for the return of Cyril Ramaphosa as ...
News
2 weeks ago
Next Article