'We are on our own': The men of Nelson Mandela Drive

'You never really think you’re going to return home empty-handed ... but it happens' 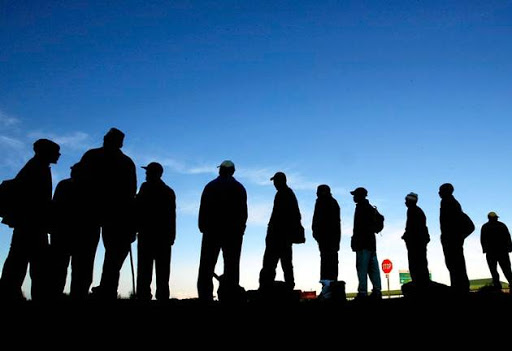 "Some of these men standing by the road are fathers. I don’t know what they say to their children when they get home," says Lebogang Sibeko. File photo.
Image: REUTERS

Lawrence Poenyane’s day begins with a familiar routine. He retreats to a nearby tree, throws down his backpack and sits on a dusty brick. It’s typically a six-hour wait. But if he’s lucky, he might pick up a painting job or some gardening work.

Across the road, groups of men in blue overalls who, like Poenyane, have braced themselves for the dark morning in the hope of getting or sharing an odd job, stand against the railings of a church. By midday, their numbers will have increased to the point where it seems pointless to wait, but they will wait nonetheless.

Though Poenyane and the other men are always hopeful, waiting on the side of the road has cleared up something for them. “We are on our own,” he says.

As many as 40 regulars wait daily for work on busy Nelson Mandela Drive in Mahikeng, otherwise known as the N18. The employer gets to choose who they want, but sometimes the job is passed on to the one most in need.

“This is not Joburg,” Poenyane says, referring to the spirit of collaboration often displayed by the men in spite of their desperation.

He has been unemployed for as long as he can remember. Before he resorted to pitching for odd jobs on the side of the road, he worked in a T-shirt printing shop in Rustenburg. He was retrenched when the owner cut costs and then eventually closed the shop.

It was around that time that he decided to return home. At first, like all migrants, he thought things would work out. He was home, after all. But it has been nearly a decade since he was retrenched.

“You never really think you’re going to return home empty-handed or return to the same situation you tried to run away from, but it happens,” he says.

Like Poenyane, Lebogang Sibeko can’t quite remember how long he has been unemployed. But he knows he’s approaching half a decade without a stable job. He has been a painter for much of his life and remembers a time when painting was not an odd or irregular job.

“You spend the whole day waiting in hunger, only to return home still hungry. Some of these men standing by the road are fathers. I don’t know what they say to their children when they get home,” he says.

As he was making his way to his regular spot on the road, he overheard on the radio that the president was in town to address issues such as unemployment. Sibeko scoffed at the idea of the state or the president creating jobs.

“Some of these politicians pass here every day, they see us. But it’s only when they need votes that they talk to us.”

A few metres from where Poenyane, Sibeko and others wait, 28-year-old Jabu Komokasi prepares to direct drivers to their regular parking spots as traffic picks up. He leaves his village of Letlhakane at 6am, the same time that Poenyane begins pitching for jobs.

“What can I do? The other option is usually crime and I hate crime.”

Before he began working as a car guard, Komokasi dreamt of learning a trade and becoming a professional plumber. But life happened, he says. “I was not going to do this forever, but then there were no funds to go further with school. So, me and a group of friends started doing odd jobs in town, like helping people with parking.”

That Komokasi is much younger than Poenyane and Sibeko is a reminder that the crisis of unemployment is often generational. Young men and women leave school, only to join their uncles and mothers in competing for the same odd jobs.

The common assumption about many young people, particularly young men who try to make a living by helping people with their groceries or to park their cars on the streets of Mahikeng, is that their plight is because of a desire to commit crime or that they come from broken families.

While there might be some truth to those assumptions — considering the dire socioeconomic issues in many communities around small towns that force young people into a life of crime — many of these young men are extremely capable and have a genuine desire to do more with their lives.

Orabile Tsietso is one of them. Like Komokasi, he sees himself as a victim of systematic circumstances over which he had no control. “I did a few courses to improve myself, but there was no job. Because I was desperate, I ended up helping people with their groceries and later a friend invited me to help him guard cars,” he says.

Councillors often hire their own people, and even then I don’t think it’s enough to absorb us all. We need serious work.

He wanted to join the army and saw working on the street as a temporary way to make a living, but as his personal situation at home worsened and jobs became scarce it became regular work. The common assumption about him, though, is that he is a drug addict or nyaope user.

“People don’t even think to ask if you have dreams or would like something better. They just see nyaope addicts when they look at us.”

As Tsietso and others are at pains to point out, they are aware that their struggles aren’t individual or personal failures but a reflection of the state’s failure to intervene in the youth unemployment crisis that is crippling their generation.

“I don’t think the government is doing enough for young people like myself. We study and end up nowhere. At least they should be able to point us in the right direction.”

Along Nelson Mandela Drive is where inequality and unemployment are most visible. Sandwiched between a business district and suburbia, it was once popular with sex workers.

After hours of waiting by the side of the road, as the sun gets hotter, a bottle in a brown paper bag is passed around. It’s the reality of their plight, they must numb the pain.

“I think it makes it easier to get home,” says painter Obakeng Mosweu. Though he doesn’t abuse alcohol himself, he understands the struggle to stay sober.

The plight of the many men who pitch for work alongside the road explains the heightened anxiety in the town every time a major employer such as Country Bird Holdings, the parent company of Supreme Chicken, floats the idea of moving its operations out of Mahikeng. This would result in a mass loss of jobs and the fear is that the situation like the one that plays out on Nelson Mandela Drive every day could become even more desperate.

Yet even with this knowledge, the local government has largely failed to respond to the crisis of unemployment.

The state’s expanded public works programme often fronts as the solution to the unemployment crisis in rural and small towns. But as anyone who has worked in the programme will tell you, it’s besieged by unending problems, particularly nepotism and politics.

“Councillors often hire their own people, and even then I don’t think it’s enough to absorb us all. We need serious work,” says Sibeko.

Watching eNCA on Sunday, I couldn't believe that youth unemployment is now estimated to have reached 65% in this country.
Opinion
1 month ago

If you have lost your job and are receiving Unemployment Insurance Fund (UIF) payments, see how best you can use the money to secure your future.
SebenzaLIVE
1 month ago
Next Article