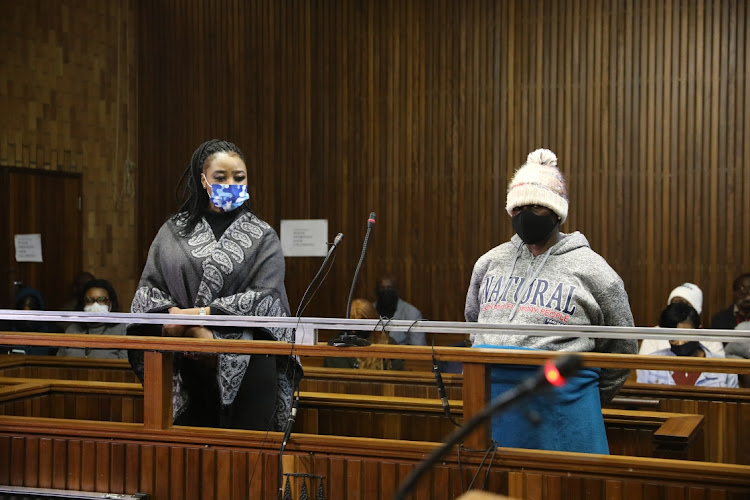 The case against two former police officers, Nomia Rosemary Ndlovu and Nomsa Mudau, was postponed in the Kempton Park magistrate’s court on Wednesday.

Mudau is charged with conspiracy to murder her husband Justice Mudau.

Ndlovu was charged with two additional counts of attempted murder. These relate to her allegedly plotting to kill Sgt Benneth Mabunda and her former station commander Col Nthipe Boloka,

Prosecutor Riana Williams told the court police were still searching for another accused who was set to appear with Ndlovu.

Ndlovu and Mudau stood side-by–side in the dock but did not say a word to each other.

Heavily pregnant Mudau told the court she was due to give birth later this month.

Nomia Rosemary Ndlovu was jailed last year after the court found she had a hand in the murders of five of her relatives and her lover.
News
3 months ago

Both accused indicated they wanted to apply for legal aid.

The case was postponed to May 25 for legal aid and to give Mudau time to give birth.

She was released on a warning.

She posed for pictures, batted her eye lashes and clasped her manicured fingernails to her grey scarf as she was led down to the court cells after her appearance.

She was not given the option to apply for bail.

Seated in the court gallery was Mudau’s ex-husband, who confirmed their divorce was finalised last year.

He said he was pleased to see the matter finally go to court after he opened a case in 2018.

Ndlovu was a police officer at the Norkem Park police station in Kempton Park and had reportedly become friends with Mudau. According to Justice Mudau, the two allegedly hatched a plan to see him murdered in his home, leaving his wife to cash in on insurance policies.

His life was allegedly spared because the same hitmen who had gone to police over Ndlovu’s plan to kill her sister Joyce had also warned him. He told SowetanLIVE sister publication TimesLIVE the alleged hitmen had been promised R150,000 for his death.

Justice Mudau, the man who alleged his wife tried to kill him with the assistance of cop-turned serial killer Nomia Rosemary Ndlovu, said he is ...
News
3 months ago

Convicted cop-turned-serial-killer Rosemary Nomia Ndlovu is to return to court this month on new charges.
News
4 months ago

The high court judge who convicted cop-turned-serial-killer Nomia Rosemary Ndlovu to six life terms behind bars has died.
News
5 months ago
Next Article