The fear we felt during July unrest was nothing compared to what Ukrainians suffer, says protester 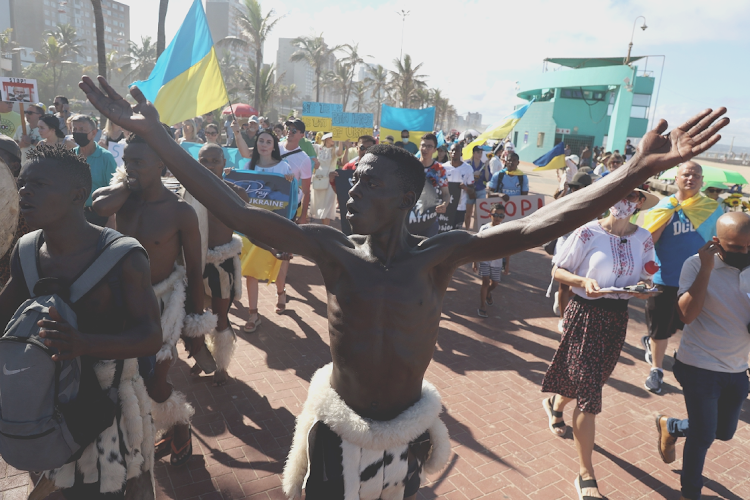 Dozens of people marched in Durban on Sunday in solidarity with Ukraine.
Image: Sandile Ndlovu

“You know how we were during that week of looting? That fear is nothing compared to what they are going through.”

That’s the observation of Durbanite Michelle Morkel, who was showing her support for Ukraine in Sunday’s “peaceful march against Russian invasion” in Durban.

The Ukrainian Association of SA held peaceful marches at the weekend — Friday, Saturday and Sunday — in Pretoria, Cape Town and Durban against the refusal of SA to condemn Russia for the war in Ukraine. SA chose to abstain from voting on the Russia-Ukraine conflict at the UN General Assembly.

Association members said they were “ashamed” of that decision, especially as it came during Human Rights Month.

The association challenged the government to “publicly and without reservation condemn the Russian invasion of Ukraine, allow visa-free entrance to the country to Ukrainians whose family members are temporarily or permanently living in SA and tell [Russian President Vladimir] Putin to stop this insane madness”.

Speaking to SowetanLIVE's sister publication TimesLIVE on the Durban leg of the protests, Katya Fedkina, a Ukrainian who has been in SA for 16 years, said her father is still in the European country.

She commended the Ukrainian army for fighting bravely and the countries that have opened their arms to her fellow countrymen and the foreigners who  were in Ukraine.

She, however, expressed her disappointment at the South African government’s decision not to drop its visa requirements for Ukrainians.

“The South African government doesn't even drop the visa for Ukrainians, so people who want to bring their relatives or friends here can't because the South African embassy in Kyiv is not functioning at the moment. I feel bad that while all the world is receiving refugees and making camps for them, SA is asking for a visa. How is that for human rights?”

Fedkina, a photographer, said her father lives in Kherson in the south of Ukraine, and they message each other when he has connection.

She said he was relatively safe despite a missile hitting a hospital a few blocks away.

“It's unbelievable. It's embarrassing. We are in the minority, why are we not standing with all the countries that are trying to defend Ukraine? That shouldn't even be a question.”

She said she has followed the news carefully because she has Ukrainian friends, including Fedkina, and she has seen first-hand how they have been suffering.

Fedkina believes Russian TV station RT was used for propaganda, thus the decision to stop its transmissions to MultiChoice's was justified.

“I'm Ukrainian, I have some family there,” said Fedkina. “We love our country, we don't need any saving like the Russian people believe. Ukraine is happy on its own. That's why it's so important to switch off the Russian channel and listen to what Ukrainians are telling you.”

She said though SA had a business relationship with Russia, it should still be able to call them out when they are in the wrong, without even going to politics.

The Ukrainian Association wants a response from the department of international relations & co-operation (Dirco) within 30 days.

IN PICS | Peaceful protesters in Durban march in solidarity with Ukraine

Peaceful protesters in Durban marched in solidarity with Ukraine on Sunday afternoon, under the banner 'Stand With Ukraine'.
News
5 months ago

Want to donate to the humanitarian crisis in Ukraine? Here's how you can help.
News
5 months ago

President Vladimir Putin warned Ukraine on Sunday that Russia's military operation would only be halted if Kyiv stopped resisting and fulfilled all ...
News
5 months ago
Next Article