Four dogs and a dream: how a 'cricket nomad' is coping in Kyiv 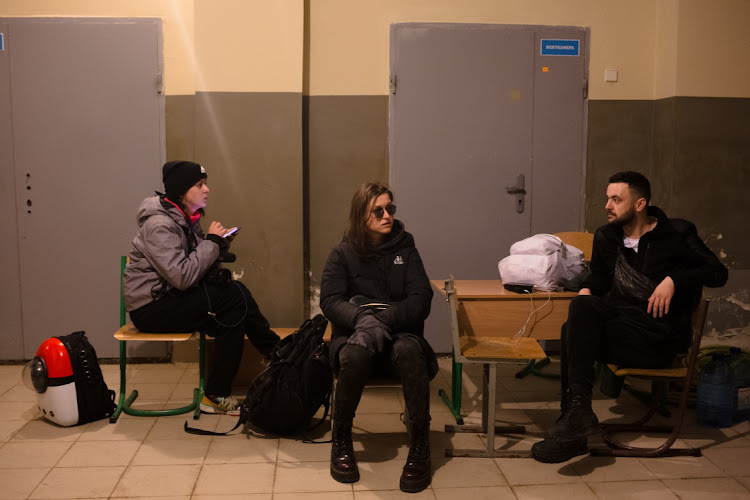 Kyivans wait for an air raid to end in a bomb shelter inside the school on February 26, 2022 in Kyiv, Ukraine. Kobus Olivier, the chief executive of the Ukraine Cricket Federation (UCF) locked himself in his seventh-floor apartment in the capital.
Image: Anastasia Vlasova

In a perfect world, Kobus Olivier would be teaching English in a private school in Kyiv and sowing cricket dreams in young minds in Ukraine.

Instead, as Russian forces closed in on Kyiv, the chief executive of the Ukraine Cricket Federation (UCF) locked himself in his seventh-floor apartment in the capital.

A self-proclaimed 'cricket nomad' from SA, Oliver has stocked up on a month's supply of food, despite having lost his appetite.

He is “terrified”, he says, but keeping him sane are his four dogs and a dream — of Ukraine becoming an associate member of the International Cricket Council (ICC) in July.

“I'm coping the best (I can) under the circumstances,” Oliver, who arrived in Ukraine following stints in SA, Kenya, the Netherlands and Dubai, told Reuters by telephone.

“I'm not being brave, I'm absolutely terrified, but there's nothing you can do. It is what it is.”

Olivier was walking his four dogs, Tickey, Ollie, Kaya and Jessie, early on Thursday when he counted 19 explosions and immediately returned to his flat.

President Cyril Ramaphosa has called for mediation and engagement to end the war unfolding between Russia and Ukraine which is threatening to lead to ...
News
4 months ago

He has since stacked mattresses against the windows to stop shattered glass from flying through the room in case of an explosion.

Inside, as he switches his television between news and cricket, such as the SA versus New Zealand game, he feels his pets are soothed by his constant presence.

“They lie next to me and watch TV,” he added. “Every now and then I give them little snacks. They are very calm, but when there's an explosion, they are absolutely terrified.”

The former Cricket Kenya chief executive said he fell in love with a snow-covered Kyiv when he first visited Ukraine on holiday.

Several more trips followed before Olivier, a bachelor, arrived four years ago to make his new home in the Ukrainian capital, complete with his father and a dog.

“I've been to 38 countries, but Kyiv for me is a unique experience — the culture, the history, the food.

“My dad passed away here, so it gives me a stronger bond with Kyiv. Whatever happens today or tomorrow, I'd not change anything.”

The UCF has been organising cricket for the last two decades and has a pool of 15,000 students, most of them Indian, at the senior level.

Under Olivier, they are on the verge of becoming an ICC associate member, bringing them grants from the game's governing body.

“It will attract sponsorship and motivate people here to play the game. It will be a game-changer,” said Olivier.

“At the moment, nobody knows what's going to happen. Our next tournament is in June, and I'm pretty optimistic things will be back on track by then.”

LISTEN | 'If we panic our parents will panic': African student stuck in Ukraine

Thousands of Africans studying in Ukraine are desperate to leave after the Russian invasion of the country.
News
4 months ago

Ukrainians and Russians living in Cape Town gathered outside the Russian embassy in the Cape Town city centre to protest against Russia's invasion of ...
News
4 months ago
Next Article