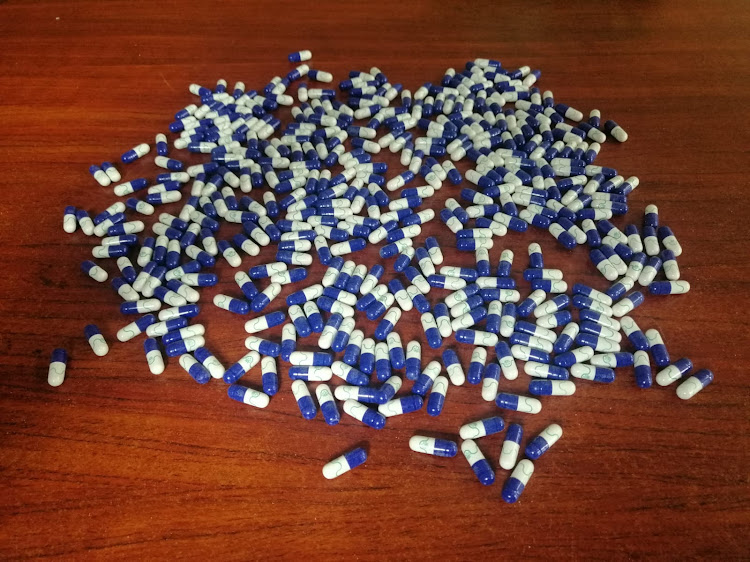 The provincial drug team nabbed two men in an e-hailing vehicle in Durban and seized drugs worth about R131,000.
Image: Supplied

Two alleged drug dealers appeared in the Durban magistrate’s court for possession of and dealing in drugs on Wednesday.

The two were arrested by the Provincial Drug and Firearm Unit who conducted a sting operation on the Durban beachfront on Tuesday.

KwaZulu-Natal police spokesperson Col Thembeka Mbele said police acted on intelligence that drugs were being transported in the area.

“While in Gresham Place in the North Beach area an e-hailing vehicle with two occupants was intercepted and searched. More than 4,000 blue and white capsules of heroin, 4,000 empty capsules, 7 large plastic packets of pure heroin weighing 100g each and 20 'boss' Mandrax tablets were seized.”

The recovered drugs have an estimated street value of R131,000.

She said the suspects, aged between 27 and 33, were arrested on the scene and charged for possession and dealing in drugs. The vehicle was seized and taken to the pound for further investigation.

Gauteng police have uncovered an alleged drug laboratory on a property in Soweto.
News
8 months ago

Western Cape police confiscated R5m worth of Mandrax tablets on board a long-distance bus on Friday morning and arrested one suspect.
News
8 months ago

Alleged drug smugglers bust with R6.9m worth of heroin in KZN

A trio of alleged drug smugglers have been bust by police while transporting heroin worth nearly R7m from Mozambique to Empangeni.
News
8 months ago

Western Cape police had a successful weekend in their fight against the illegal drug trade with large seizures made in a number of operations.
News
9 months ago
Next Article