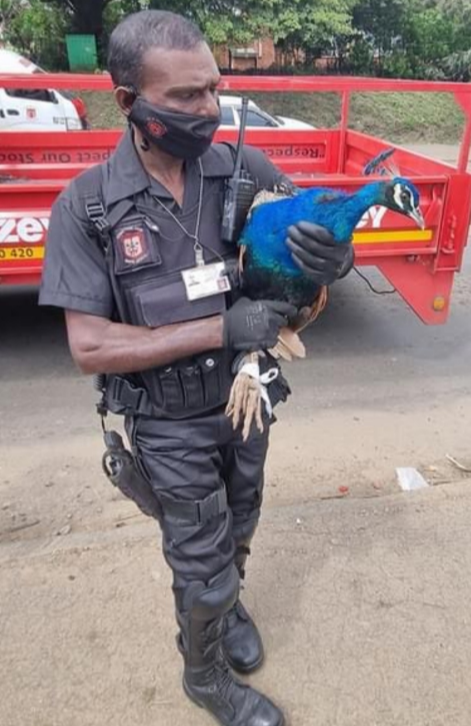 This peacock was being sold for R300 before it was rescued by a private security firm on Friday.
Image: Reaction Unit SA

A peacock has been rescued by a private security firm, after two men allegedly tried to sell the bird in Verulam, north of Durban, for R300.

Prem Balram, spokesperson for Reaction Unit SA, said the peacock was recovered in Todd Street in the town on Friday morning.

“A passer-by contacted Reaction Unit SA after he noticed the two men selling a peacock to the occupants of a white VW Golf GTI.

“Reaction officers responded to the call and on arrival located the peacock on the back seat of the vehicle.

“Its legs were bound. According to the driver of the car, he had paid the two individuals R300.”

Balram said the men had removed some of the bird's feathers which “they intended on selling separately”.

He told TimesLIVE the peacock was handed to a local temple and the men were released.

The Gauteng health department pays R450,000 a month for repairs and maintenance of CCTV equipment.
News
6 months ago

Safety of nine witnesses in Senzo Meyiwa trial will be protected: state

The trial of the five men accused of the murder of football star Senzo Meyiwa will begin from April 11 next year in the high court in Pretoria.
News
6 months ago
Next Article