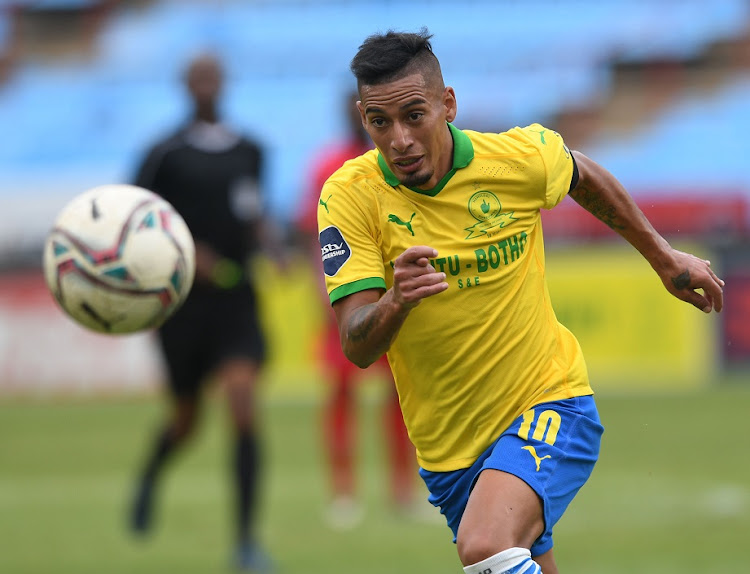 Gaston Sirino is a doubtful starter for Mamelodi Sundowns in the MTN8 final against Cape Town City in Durban on Saturday after battling flu this week.
Image: Sydney Mahlangu/BackpagePix/Gallo Images

Mamelodi Sundowns co-head coach Rulani Mokwena has provided their injury update ahead of the MTN8 final against Cape Town City at the Moses Mabhida Stadium on Saturday, highlighting that their biggest worry is attacking midfielder Gaston Sirino.

The Uruguayan missed the weekend Caf Champions League match against Maniema Union of DR Congo because he was sick with flu.

“We're hoping that Gaston Sirino passes a late medical test. It's not even a fitness test because it's not really an injury,” Mokwena said in Durban on Thursday.

“He missed the last game with a very severe bout of flu. He hasn't started training with us because he's still bedridden but we are quite hopeful and crossing our fingers that he's available for the game.

“So apart from that, we're looking in a better space than we looked before the Golden Arrows (league match on Wednesday last week).

“It's difficult match for us and we need everybody. We've got almost everybody available.”

Mvala and De Reuck's recovery will be the most pleasing piece of news to Bafana Bafana coach Hugo Broos who has used both players regularly in the 2022 Fifa World Cup qualifiers.

Broos named Mvala and De Reuck alongside Sundowns right back Thapelo Morena in his 23-man provisional squad to face Zimbabwe and Ghana next month in the last two of the group World Cup qualifiers.

Bafana are on top of Group G with 10 points but need to beat Zimbabwe at home on November 11 and at least get a draw away to Ghana to qualify for the two legged play-off that will produce five teams to represent Africa in next year's World Cup in Qatar.