‘We delivered you to the promised land’: Mabuza urges QwaQwa residents to vote ANC despite failings 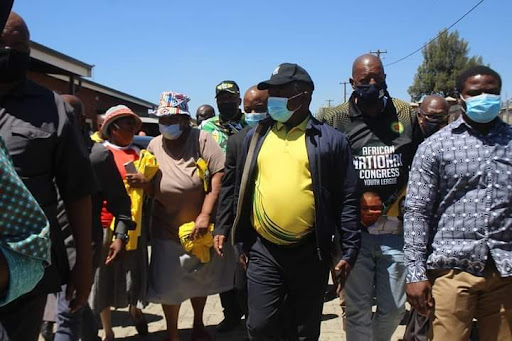 ANC deputy president David Mabuza has likened the party’s role in SA to that of Moses, who delivered the Israelites from Egypt into the promised land.

Mabuza led the ANC’s local government election campaign in QwaQwa, in the Free State, on Tuesday, where he met with communities to discuss service delivery failings by his party.

On the campaign trail galvanising votes for the ANC, Mabuza called on communities to go out and canvas for the party.

“Remind them all at home to stand up and vote for the ANC. The ANC is a party of the people. It is your organisation that delivered you from Egypt to the promised land.

“Mistakes have been made along the way but mistakes can be corrected. We ask that you remind everyone, even your neighbours, that on November 1 we vote for the ANC and return it to power,” he said.

Deputy President David Mabuza has opened an ANC succession debate in the middle of crucial municipal election campaigning, saying he could run for ...
News
3 weeks ago

At a community meeting, a song praising ANC policies meant to eradicate poverty did most of the campaign heavy-lifting, with the deputy president seeming to be in high spirits ahead of hearing from those gathered.

“Re na le matlo, re na le metsi, thuto ea mahala — rea leboha ANC”, which translates to “we have houses, we have water, education is free — we thank you ANC”, blasted through the speakers, with Mabuza, Free State premier Sisi Ntombela and community members singing along.

However, the jubilation was short-lived as a group of church members began stating their complaints against the ANC-led municipality, which is accused of failing to prioritise them for a site to build their church.

“The municipality has failed us with land for our church. The ANC was born out of the church and its first priority should be a church. As people of God we are sick and tired of the promises that have been made over and over. We have engaged with the municipality. They have promised us meetings that never materialise,” one member said.

Another church member accused Ntombela of dishonesty and of failing them.

“The church on its own has about 4,000 members. The promise [for land] was made by the premier in front of 4,000 members. When 4,000 people don’t vote for the ANC, do you know the impact that will have? Is the ANC a trustworthy organisation, like it was during the times of Nelson Mandela?” another member asked.

Businessman Sipho Mtshweni has been at the forefront of fighting for better living conditions for the community of Mamelodi, east of Pretoria.
News
2 weeks ago

The ANC in Gauteng has raised alarm, fearing that escalating political violence in Tshwane could cost it votes in the upcoming municipal elections.
News
3 weeks ago

The premier assured the congregants, saying she made him “put my foot down” that the matter would be addressed.

As the meeting progressed, more challenges confronted Mabuza, the first being water scarcity.

“There is a village here that has had no water for 20 years. Today you come here and tell us to vote for the ANC under these conditions. The leadership here, locally, should be ashamed of being here with you. The ANC keeps giving us people [ward candidates] we don’t want and our problems are never solved,” said one man.

Mabuza said it hurt him deeply that there were people without water, and called for the ward councillor to explain.

The region has been battling water shortages for decades, and the councillor acknowledged she knew water provision was a problem in QwaQwa. She said the municipality had tried short-term measures to mitigate the effects until a lasting solution can be found.

“JoJo tanks were made available but there were no roads to take the tanks to communities. The municipality had to first try to scrape the road, so we put the JoJo tanks in different homes and that contributed to delays.

“The municipality then put in a borehole. It took two years of work. Because of the steep area where the pipes are laid, we could not pump water to these areas,” she explained.

Another community member decried road conditions and, in particular, a bridge the community has decided to construct due to the failure of the government to provide one.

“As the community from 2016 we are building our own bridge. The same people who have been trying to stop us are here with you today.

“The local leaders refuse to listen to the community. Twenty years without water, the bridge that they are now using to campaign is being built by the community and we have been complaining about the same things. We hope your presence here today means we can get help because we have given up on local leaders,” said the man.

He said the community was in dire need of roads and water, saying: “We are tired of saying the same things to people coming to campaign for every election without any progress”.

Mabuza asked the community to give the ANC another chance to govern.

“We ask that you, as a community, give the ANC a chance despite this because sometimes when people are deployed by the ANC they don’t do what the ANC sent them to do. I want to see you in this community work together as the children of the ANC. When one does something wrong they will be punished by the ANC,” said Mabuza.

He concluded by encouraging those present at the community meeting to vaccinate against Covid-19.