Former minister threatens to take her fight to high court 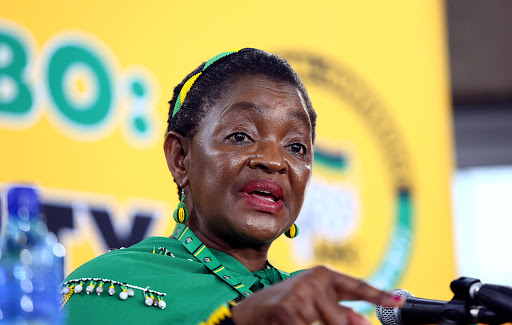 Bathabile Dlamini is one of the former cabinet ministers who have resigned. File photo.
Image: Masi Losi

The perjury case against former social development minister and ANC Women’s League president Bathabile Dlamini has been set down to proceed for plea and trial on November 24, magistrate Betty Khumalo ruled on Friday.

Dlamini took the stand for the second time in the Johannesburg magistrate’s court after the director of public prosecutions took a decision to prosecute her for allegedly giving false evidence under oath in 2018.

Presenting Dlamini’s case, advocate Tshepiso Mphahlane raised objections, including concern over the “unlawful” involvement of the Hawks in the matter.

“My client is concerned about the involvement of the Hawks in this matter because, in our view, it is unlawful conduct on their part as it is not in accordance with the Police Service Act which established the Hawks. The mandate of the Hawks is very clear: to investigate, prevent and combat national priority offences, and these include serious commercial crimes, corruption and other serious crimes,” he said.

“The question we are raising is: did they get involved because my client is a former minister and a politician?”

The matter relates to Dlamini’s alleged role in dealing with the Social Security Agency of SA (Sassa) fiasco in 2017.

At the time of the crisis, judge Bernard Ngoepe found Dlamini’s conduct had been “reckless and grossly negligent” and ordered her to pay a portion of the costs of litigation.

Mphahlane said there was not much weight to the charge against Dlamini, arguing the case was from a cost order judgment and saying Dlamini had not committed a serious crime.

He also took issue with the matter being moved to the regional court.

“Ordinarily, perjury is dealt with in lower courts, not regional, because it is not a national priority offence and that is where our objection is,” argued Mphahlane.

To back his claims against the Hawks’ involvement, Mphahlane cited their involvement in the [former minister] Malusi Gigaba matter which was condemned by the high court, and threatened to take Dlamini’s fight to the same court.

“We are saying should the situation persist, we will consider approaching the high court for appropriate relief because it suggests to the public that Miss Dlamini faces a serious crime, but she is not.”

The perjury case against ANC Women's League president and former social development minister Bathabile Dlamini has been pushed to next week Friday ...
News
2 months ago

The Director of Public Prosecutions in Gauteng has taken a decision to prosecute former social development minister Bathabile Dlamini for her alleged ...
News
3 months ago
Next Article