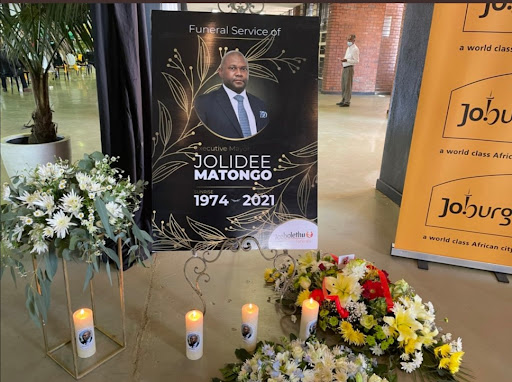 Johannesburg mayor Jolidee Matongo was laid to rest on Friday after he was killed in a recent car crash
Image: City of Joburg/Twitter

The heartbreaking sobs of Kedibone Matongo filled the Finetown hall in Johannesburg on Friday as her moving tribute to her late husband, executive mayor Jolidee Matongo, was read out at his funeral.

The accident also claimed the lives of Lenasia electrician Sagel Singh, 23, and a still unidentified pedestrian.

Matongo’s driver and bodyguard — both seriously injured in the crash — are recovering in hospital.

A rendition of Endless Love, by Luther Vandross and Mariah Carey, was played as part of Kedibone's tribute before her heartfelt message was read out.

In her tribute, read out by Mpho Motsepe, Kedibone said: “Never in a million years would I have thought I would be in this position.

“It is a very bitter pill to swallow.”

She said they met while she was in high school.

“My birthday anniversary will never be the same again, because you always ensured that these days were celebrated and given the prominence they deserved.

“On our wedding day you said we are selling our freedom on Freedom Day. I am grateful for the love you have given me and our son. You are truly a unique breed.

“On Sunday when I returned from viewing your lifeless body I prayed. Prayer turned into what felt like a conversation with you.

“That conversation took place at 3am in the morning, I soaked in a bath and felt a load on my shoulders taken off.

“My humble calm, husband who always had a smile on his face. The pain that I am feeling now, I don't know how and when it will subside but I will hold onto your mantra: God will provide.

“I'm going to miss you. Your smile would keep me going. Now I must adjust to being a mum and a dad to our son.”

A message from Matongo's son was also read out.

Jacob Khawe, a close friend of Matongo and ANC provincial secretary in Gauteng, described his death as an “immeasurable loss”.

“The gap that has been left by the departure of this magnificent spirit will soon enough be felt.

“Our paths first crossed in 1988. During all these years since our lives have been intertwined. We shared the joy of being young, the pain of poverty, the teachings of the SA revolution.”

Khawe said they were “friends for life”. 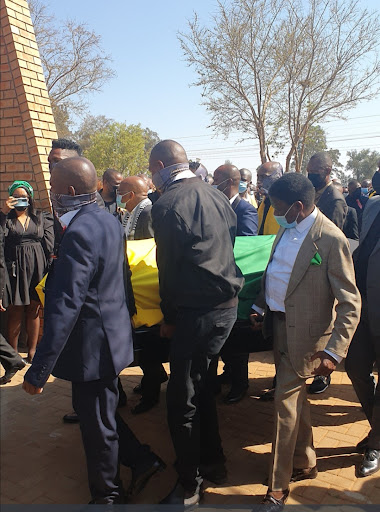 “I knew you when you were happy and not happy.

“I saw you fall in love for the first time. I saw when you had your first child. I saw you commit yourself to the student struggle and the youth of our country.

“I saw you when you went to church and how I thought you would live to bury me.

“I saw you in that car on September 18. I held you, I called you. You never responded and I knew it was the end of our journey,” said Khawe.

“To many of us it is finally dawning that our gentle giant ... has departed for good.

“Even in our deepest pain, we consider ourselves privileged that in comrade Jolidee we were in the company of so rare a jewel, who was a genuine friend, an activist to the core, a servant of the people and a well-rounded revolutionary.

“We counted him among the finest in our ranks. In him we saw a bright future for our country and our movement.

Mashatile said Matongo was a “child of the movement, his second home and his life”.

He said as mayor Matongo remained disciplined and loyal.

“Cruel death has robbed us of boundless energy, his steadfastness, his professionalism and his never-die spirit.

“We always admired his warmth and compassion especially for the poor and marginalised.

“We took note of the work he did to advance the empowerment of women. We drew strength from his ability to serve the ANC not for personal glory nor distinction.

“We will miss his passion for building an inclusive city of Johannesburg, working with everybody including opposition parties.”

“The highest tribute and greatest monument we could ever build for comrade Joli is to redouble our efforts in our ongoing endeavour to renew, revive and rebuild an ethical ANC.”

President Cyril Ramaphosa on Thursday sang the praises of the late Johannesburg mayor  Jolidee Matongo, saying he was an outstanding leader who ...
News
3 months ago

ANC Greater Johannesburg deputy secretary Loyiso Masuku says the City of Johannesburg is going through “a test of strength” after the death of newly ...
News
3 months ago
Next Article